This is the fourth in a series of posts on findings from the Inventory of Missouri’s Estimated Greenhouse Gas Emissions in 1990, published by MODNR in 1996. A follow up to the inventory, the Greenhouse Gas Emission Trends and Projections for Missouri, 1990-2015 Technical Report was published by MODNR in 1999. It reported changes in emissions between 1990, the year of the baseline GHG inventory, and 1996, and it predicted trends through 2015. 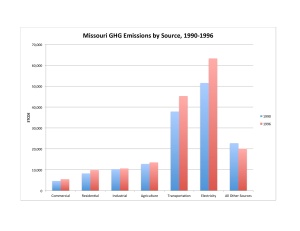 These numbers reflect several underlying trends. First, the population of Missouri grew about 6.5% between 1990 and 1996. Second, the 1990s were a time of economic expansion. Third, the 1990s were a time when the United States was using ever more equipment powered by electricity, from industrial motors, to HVAC equipment, to TVs, cell phones, and computers. And finally, the 1990s were a time when the number of miles driven was expanding, and consumers were choosing SUVs over energy efficient cars. It wasn’t until after 2005 that climate change stormed into the national awareness, so during the 1990s, energy efficiency efforts had not yet gotten going. Because of all these trends, it is not surprising that emissions grew between 1990 and 1996, and that emissions related to electricity generation/consumption and transportation grew fastest.

The update is the last state-wide study of Missouri’s GHG emissions published on the MODNR website. Since then, EPA has published reports on GHG emissions from the burning of fossil fuel for each state. This may actually be the best data for comparing GHG emissions between states, as it uses standardized methods, and repeats yearly. However, it leaves out a significant portion of emissions – in Missouri, almost 25% in 1990.

It is difficult to target policy to reduce Missouri’s contribution to climate change without knowing where to aim it. The energy and climate change situations have changed quite a bit since 1966, and updated information would be welcome.

Greenhouse Gas Emission Trends and Projections for Missouri, 1990-2015 Technical Report is available on the website of the Missouri Department of Natural Resources, http://www.dnr.mo.gov/energy/cc/ghg.htm.