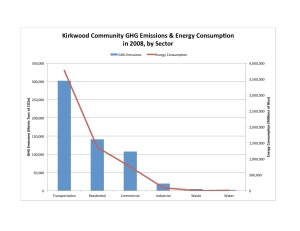 Kirkwood is a suburban community near St. Louis. They published their Baseline Greenhouse Gas Emissions Inventory for 2008 in 2009. They studied community emissions and emissions from government operations. The latter are a subset of the former, but municipalities study them separately because they wish to demonstrate leadership, and they have direct control over their own emissions.

Let’s review the community side first: total community emissions were 576,676 metric tons of CO2e, while consuming 5,985,775 million Btu of energy. Using data from the U.S. Census Bureau, I calculate that per person this represented 21.48 metric tons CO2e and 223.37 million Btu. The first graph shows emissions and energy consumption by sector. Transportation accounted for more than twice as much GHG emission and energy consumption as the next largest source, residential buildings.

As in several other suburban communities, GHG emissions from the industrial and waste, and water sectors were small.

The second graph shows that, as might be expected, transportation fuels were the source of the largest amount of GHG emissions. In Kirkwood, as in other municipalities, electricity was by far the most GHG intense emission source.

Kirkwood studied GHG emissions, energy consumption, and energy costs for its 2008 government operations. The bar-line graph at right shows that buildings and facilities accounted for the largest amount of GHG, followed by vehicles used in the Kirkwood fleet and vehicles used by employees in their daily commute. The energy consumed in Kirkwood’s buildings and facilities was much more GHG intense than the fuel used in fleet or employee vehicles.

The final chart at right shows the costs of these types of energy. Employees fuel their own vehicles, so the cost to the city was zero. While the energy consumed in Kirkwood’s buildings was about 32% more than that consumed by fleet vehicles, its cost was 25% less.

The Kirkwood municipal government distributes water to many of its residents. While it purchases the water from Missouri American Water Co., the water distribution system involves the operation of storage tanks and pumps. Water delivery thus constitutes a larger fraction of government emissions and energy consumption for Kirkwood than for many of its neighbors.

Baseline Greenhouse Gas Emissions Inventory for 2008 is Kirkwood’s full GHG report. I can no longer find it indexed on Google or on the Kirkwood website, however. A slide presentation summarizing the data is available.

For those wanting the full report, contact the City of Kirkwood. Or, I have a copy, and you can contact me.

Population statistics are from Table 4: Annual Estimates of the Population for Incorporated Places in Missouri, U.S. Census Bureau, https://www.census.gov/popest/data/cities/totals/2009/SUB-EST2009-4.html.