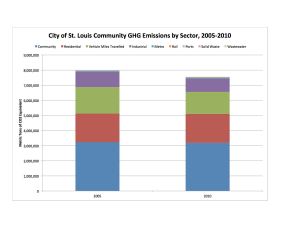 The City of St. Louis published its greenhouse gas inventory in 2012. St. Louis is the core of the largest urban region in Missouri. Economically diverse, it is comparatively small geographically, and the majority of the metropolitan population lives outside the city itself, in surrounding municipalities and counties. The inventory studied 2005 as the baseline year, and included an update for the year 2010. St. Louis studied its total community emissions, as well as emissions from the operations of the city government. The latter are a subset of the former, but many municipalities study them separately because they directly control the activities that lead to the emissions, and because they wish to demonstrate leadership in reducing GHG emissions.

Taking the community side first: in 2005, community emissions were 7,996,469 MTCO2e, or 24.6 MTCO2e per capita. As the graphs at right show, the Commercial Sector accounted for the largest portion of emissions (40%), followed by the Residential and Transportation Sectors. In terms of sources, the second graph shows that electricity accounted for 60% of community emissions, followed  distantly by transportation fuels (gasoline and diesel). T 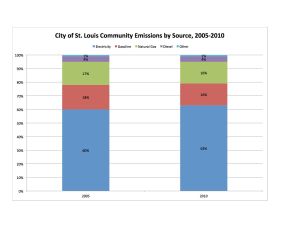 his follows a pattern that we have seen in several other the local GHG inventories; it has been my thesis that the primary energy used by commercial buildings is electricity, which emits relatively more GHG per unit of energy, while the main transportation fuels, gasoline and diesel, emit relatively less GHG per unit of energy. In addition, the City of St. Louis serves as a commercial center for the surrounding region.

In 2010, community emissions were 7,549,862 MTCO2e, a reduction of about 6%. Per capita, emissions were 23.6 MTCO2e, a per capita reduction of about 4%. During the same period, population was estimated to decline 1%, so this represents a small, but real, reduction both on an absolute basis, and on a per capita basis. The sector and source profiles for 2010 were very similar to those of 2005.

In both years, the consumption of electricity in commercial buildings was the activity that generated the largest amount of GHG emissions. More than 1/3 of all community emissions came from this one activity.

The inventory included emissions from Lambert-St. Louis International Airport in the government side of the inventory. Lambert Field is owned and operated by the St. Louis Airport Authority, a legally distinct entity from the City of St. Louis. However, the City of St. Louis appoints a majority of commissioners to the authority’s board, and thus, it was felt to be under the control of the City. However, because the airport is located in St. Louis County, its emissions were not included in the community side of the inventory. Presumably they were included in the community side of the St. Louis County inventory, but that report does not directly say so.

Operations of the City of St. Louis government emitted 316,240 MTCO2e in 2005. As shown in the third graph at right, Lambert Field was the largest-emitting sector, followed by other buildings and facilities. St. Louis operates its own potable water treatment and delivery system, and it accounted for the third largest portion of emissions. As has been the case with several other municipalities, the governments emissions came primarily from the consumption of electricity. As shown in the fourth graph at right, electricity accounted for nine times as much as the next largest source, gasoline.