In previous posts I have reported on hazardous mine lands, superfund sites, and toxic releases in Missouri. The Hazardous Waste Program of the Missouri Department of Natural Resources publishes the Missouri Registry Annual Report. This report contains information on hazardous waste disposal sites that meet certain criteria. There is some overlap, but this document reports on sites that are not covered in previous posts.

The Registry of Confirmed Abandoned or Uncontrolled Hazardous Wast Disposal Sites in Missouri includes sites that contain waste that is hazardous as defined by state or federal law, that were disposed of before regulation began or illegally since then, and are present at concentrations above “health-based screening levels.” Thousands of hazardous substances do not meet these stringent criteria and are not included in the registry. Examples of unlisted sites include: 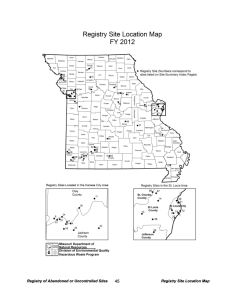 The Registry lists 89 sites. The map at right shows their distribution around the state. They tend to cluster near St. Louis, Kansas City, and Springfield-Joplin.

Only three of the sites are listed as Class 1 sites (representing imminent danger of causing irreversible damage to the public health or environment). They include the HCI-Chemtech Site and the Thompson Chemical/Superior Solvents Site, both in the City of St. Louis, and the Lake City Army Ammunition Plant, in Independence. Of these, the Lake City Army Ammunition Plant Site is also on the NPL (Superfund list).

Twelve sites are listed as Class 2 sites (representing a significant threat to the environment). In the St. Louis Region they include the ACME Battery Site. In the Kansas City Region they include the Armour Road Site, the BFI-Missouri City Landfill Site, the Conservation Chemical Company Site, the HCI Chemtech-Birmingham Road Site, and the HCI Chemtech-Stillwell Street Site. In the Springfield-Joplin Region they include the HCI Chemtech-Springfield Site, the R&O Processors/Lux Theater Site in Granby, and the Solid State Circuits Site in Republic. In other locations sites include the Sentinel Wood Treating Site in Ava, the FMGP Site, in Moberly, and the  Zykan Property (Bob’s Home Service Landfill-Zykan Landfill) Site near Wright City. Of the Class 2 sites, the Armour Road Site, the Conservation Chemical Company Site, and the Solid State Circuits Site are also on the NPL (Superfund list)

The remaining 74 sites on the Registry are listed as Classes 3-5. How many unlisted sites contain hazardous substances not included in the Registry is unknown.

By mogreenstats in Land on 2013/02/28.
← Toxic Releases in Missouri Impaired Surface Water in Missouri →