In previous posts I have reported on impaired surface waters, the nature of surface water contaminants, and contamination of groundwater from hazardous waste sites. In this post I will focus on the purity of Missouri’s shallow ground water resources.

Shallow groundwater is the source of drinking water for many people in Missouri. Virtually all self-supplied water comes from shallow sources. In addition, many communities, even large ones such as St. Joseph, Independence, Columbia, and St. Charles, source their drinking water from shallow alluvial wells near rivers. Some shallow water sources are unconfined – that is, they are not surrounded by impermeable rock formations. Thus, contaminants can potentially seep into the water sources if they have the chance.

The most widespread source of potential contamination is farming. The USDA indicates that about 28,900,000 acres  (65%) of Missouri land is in farms. Slater & Ferrand estimated that in 2000 about 2 million pounds of fertilizer and pesticide were consumed in Missouri, and USDA data suggest that national consumption did not changed substantially between 2000 and 2010. Thus, it is probably safe to assume that around 2 million pounds of fertilizer are applied to about 29 million acres of Missouri land each year.

Concerns arose that fertilizers and pesticides could seep into groundwater supplies. Ironically, a well is itself a hole in the ground, and if it is not sealed properly, it could provide a path for contamination to seep into the groundwater at the very point where it would be pulled into the water supply by the well pump. 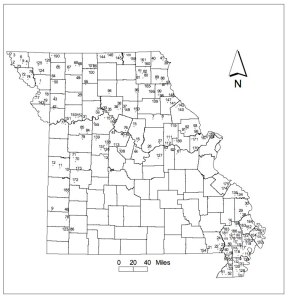 In 2006, the Missouri Department of Natural Resources and Department of Agriculture cooperated to study whether this problem was occurring in Missouri. They identified 76 counties at the highest risk because of the nature of the groundwater and overlying geology. They then collected 351 samples from 190 different wells, and checked for the presence of four common herbicides: Atrazine, Alachlor, Metachlor, and Simazine. For each the EPA has established Maximum Concentration Levels (MCL) beyond which its presence in water supplies is hazardous. The collection sites are shown in the map at right.

By mogreenstats in Water on 2013/03/21.
← Missouri Groundwater Contaminated at 607 Hazardous Waste Sites Map of Impaired Surface Water In Missouri →