I’ve been blogging on findings from the Missouri Water Quality Report (Section 305(b) Report), 2012, published by the Water Quality Program of the Missouri Department of Natural Resources. In previous posts, I reported on the amount of impaired surface water in Missouri, and on its principal contaminants. 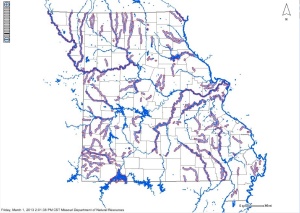 Some comment is needed. In my post on the amount of impaired surface water in Missouri, I noted that the report listed about 36% of Missouri’s stream miles as impaired, and about 23% of Missouri’s lake acres. The map seems to disagree, especially with regard to streams. A much higher percentage of streams look impaired on the map.

I don’t really know the reason. Some possible explanations spring to mind. First, the data in the report was last updated in 2010, while the data in the map reflects the 2012 list of impaired water. Second, many smaller streams are not shown on the map, and they may be less impaired than the major streams and rivers. Third, it is possible that the inconsistency is an artifact of the mapping process. None of the explanations seems convincing, however. I’m going to have to leave the inconsistency unexplained.

I created the map using the geographic information system of the DNR. http://dnr.mo.gov/internetmapviewer/quit.map. I made the following selections:

By mogreenstats in Water on 2013/03/25.
← Shallow Groundwater Contaminants Within Established Limits 2,738 Public Water Systems in Missouri →