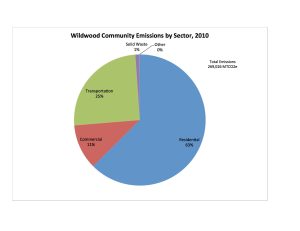 Wildwood is an exurban municipality in St. Louis County. It is the least developed and least densely populated of the municipalities that have conducted GHG inventories; much of the land within the city boundaries consists of forested hills.

Wildwood published its greenhouse gas inventory in early 2013, using 2010 as its baseline year. Wildwood studied community emissions and emissions from government operations. The latter are a subset of the former, but municipalities break them out separately because they have direct control over their own emissions, while they can only influence community emissions indirectly. Many municipalities also want to demonstrate leadership on the issue. 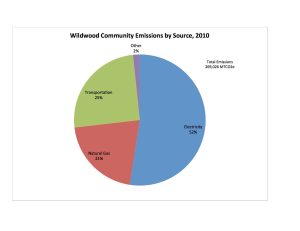 The second graph shows community emissions and energy consumption by source. Consumption of electricity was by far the largest source of GHG emissions in Wildwood. 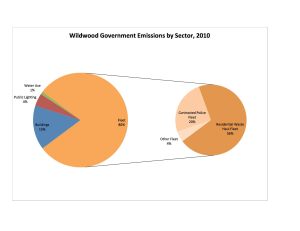 In the third graph at right, emissions from buildings, public lighting, and water consumption are shown in blue, red, and green. Vehicle fleet emissions are shown in orange in the large pie on the left, and then broken out by type of fleet in the smaller pie on the right. Overall, the vehicle fleet accounted for 80% of government emissions, and waste hauling accounted for 56% of that 80%.

Wildwood’s results are different from those of many other municipalities that have conducted GHGs: their buildings account for a much smaller fraction of emissions, and their vehicle fleet a much larger fraction. There are several possible reasons: first, Wildwood estimated emissions from waste hauling trucks as they traveled the streets, where many small municipalities do not. These are large, heavy vehicles that are constantly starting, stopping, and idling. Second, where many governments provide services using city employees and city equipment, Wildwood provides many services through contractors. For instance, at the time the GHG inventory was conducted, Wildwood leased the space for its city hall and contracted for police services from the St. Louis County Police. And third, Wildwood does not operate recreational centers, where most other municipalities do. These often contain energy intensive facilities, such as swimming pools or ice rinks.

In my next post I will update my summary of GHG inventories that have been conducted in Missouri, and I will discuss some of the reasons for the differences between them.

The City of Wildwood, Missouri 2010 Greenhouse Gas Emissions Inventory. At the time of this writing, the inventory has been reported to the City Council, but has not yet been posted on the City of Wildwood’s webpage. For a copy, contact Joe Vujnich, Director of Planning and Parks, joe@cityofwildwood.com.

UPDATE: Wildwood has updated their website, and the GHG inventory is now available on the Planning Department’s Strategic Projects page:  City of Wildwood Home Page » Your Government–Planning » Strategic Projects. http://www.cityofwildwood.com/197/Strategic-Projects.

By mogreenstats in Climate Change on 2013/04/15.
← Maplewood Reduces GHG Emissions 5% Wildwood and Maplewood Lead the Pack on GHG Emissions – But Should They Celebrate? →