I downloaded data going back 10 years (2012-1993), and for a longer term perspective, for 1993 and 1983. Nineteen Missouri counties have been monitored for more than 6 of those 12 years. I put them in three groups: a group along the Mississippi River north and south of St. Louis, a group in the Kansas City-St. Joseph region, and a widely dispersed “other” group. 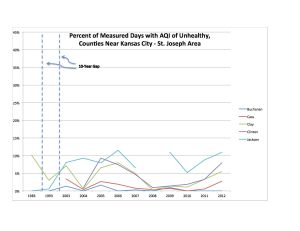 The second graph is for counties in the Kansas City-St. Joseph area. As we saw in the graphs for good air quality (previous post), the region started off with better air than did the Mississippi counties. Jackson County started with zero days of unhealthy air in 1983, and less than 2% in 1993. This seems to be an unusual finding, and one wonders if it is an error. The overall trend here seems to be flat, although the counties tend to show the same uptick in 2012 as the counties along the Mississippi. 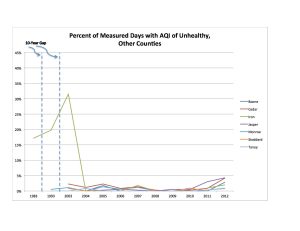 The uptick seen in 2012 for virtually all counties is probably related to the drought and record heat experienced around the state in that year. (See here for my post on it.)

I started this series of posts remembering The Day the Sun Didn’t Shine, November 28, 1939 in St. Louis. Compared to that, our air quality has clearly improved. Even since 1983, the number of unhealthy air days seems to have significantly decreased. However, the trend with good air quality days is not so marked. A significant portion of the state, especially in the large metropolitan areas, is still breathing air that is less than good on 3-5 out of every 10 monitored days.

Since posting the above, I have discovered that the Department of Natural Resources operated an air pollution monitoring site in Glover, MO. In 2003, the Glover Lead Smelter closed, and perhaps this accounts for the sudden improvement in sulfur dioxide levels in Iron County.

By mogreenstats in Air on 2013/05/16.
← On Some Days, Air Quality is Good Ozone Is the Most Important Air Pollutant →