Energy consumption is not an environmental topic per se, but it becomes one because so many of the environmental challenges we face derive from the processes we use to obtain energy, and from the emissions that occur when we use it. In particular, the human contribution to climate change comes principally from the burning of fossil fuel to obtain energy.

In a previous post, I discussed statewide GHG emissions from fossil fuel, and I compared Missouri to other states. I thought it might be useful to see how Missouri’s energy consumption has changed over time. 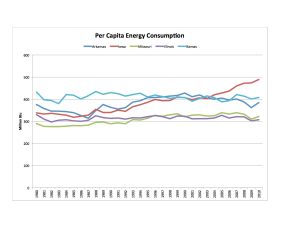 The graph at right shows per capita energy consumption for Missouri and for four surrounding states: Arkansas, Iowa, Illinois, and Kansas. The graph covers the years 1980-2010.

Per capita energy consumption has grown significantly in Iowa, and slightly in Missouri and Arkansas. It has declined slightly in Kansas and Illinois. Missouri began the period as the lowest consumer of energy per capita among the five states, and finished the period a close second lowest.

I don’t know why Iowa’s energy consumption has grown so significantly when the other states have not.

By mogreenstats in Energy on 2013/05/23.
← Ozone Is the Most Important Air Pollutant Energy Consumption per Unit of Gross State Product →