Per Capita Energy Consumption by Sector 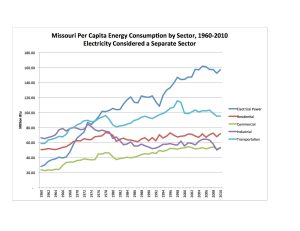 Missouri’s population grew from 4,326,000 to 5,996,231 between 1960 and 2010. Thus, even if every person in Missouri used the same amount of energy, total consumption would grow. The graphs at right shows Missouri energy consumption by sector on a per capita basis. The first one shows the data with electricity considered as a separate sector. 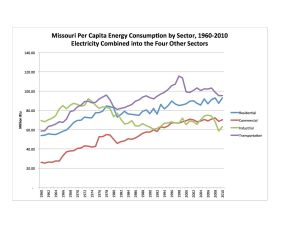 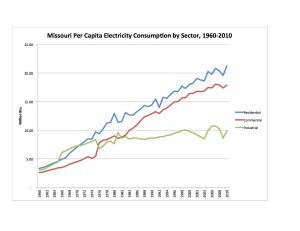 In my next post, I will report on energy consumption by sector per unit of GSP.

For energy consumption: The data for this post is not found on a single source. It was pieced together from data available at the State Energy Data System(SEDS): 1960-2010 (Complete), Missouri State Profile and Energy Estimates, Energy Information Administration, http://www.eia.gov/state/seds/seds-data-complete.cfm?sid=MO#Consumption.