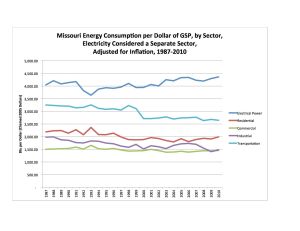 The graph at right shows for each major sector the number of Btu consumed per dollar of economic output in Missouri. The dollars are inflation adjusted, and the graph considers electrical power to be a separate sector. The shape of the graph looks very different from the one in the previous post because this graph only covers the years 1987-2010, where the previous one went back to 1963. One of the challenges I have encountered in trying to explore this information is that every website presents its data differently, and they don’t always cover the same years. The sources I consulted did not have Missouri’s Gross State Product for years prior to 1987. In addition, the data was in two different series, one using 1997 dollars, and one using 2005 dollars. The 1997 dollars have been adjusted to 2005 dollars.

The third graph at right shows consumption of electrical power by sector per unit of inflation-adjusted GSP. The transportation sector is not a significant consumer of electricity and has been omitted. When we looked at per capita consumption, the graph showed that per capita energy consumption had skyrocketed. 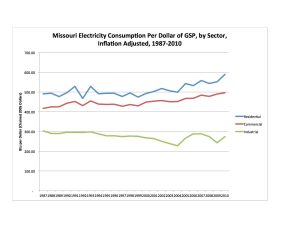 For energy consumption: The data for this post is not found on a single source. It was pieced together from data available at the State Energy Data System(SEDS): 1960-2010 (Complete), Missouri State Profile and Energy Estimates, Energy Information Administration, http://www.eia.gov/state/seds/seds-data-complete.cfm?sid=MO#Consumption.

By mogreenstats in Energy on 2013/06/22.
← Energy Consumption by Sector Per Unit of Economic Output Tornadoes In and Around Missouri →