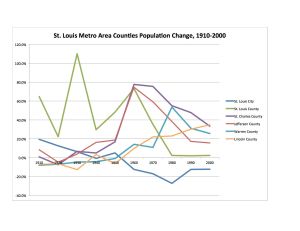 Historically, the population in urban areas has grown more quickly than in rural areas. (See previous post.) In the late 1800s and early 1900s, city centers grew most rapidly. Following World War II, however, the proliferation of automobiles led to the growth of suburbs, and for a while suburbs showed the most rapid growth. After 1980, however, even that began to change, as people moved ever farther from the city center, into what are now called exurbs.

Nowhere in the state do these trends align with county boundaries as well as in the St. Louis area. The graph at right shows the percentage population gain by decade for 6 counties in the St. Louis region. The dark blue line represents St. Louis City, the urban core. It grew most rapidly during the 1800s. By 1900, it’s growth rate had already slowed, and since 1950 it has lost population steadily. The green line represents St. Louis County, the suburbs; it grew strongly until about 1960, after which its rate of growth slowed. 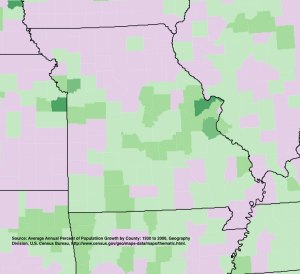 Jefferson County and St. Charles County, the red and purple lines, represent the transition between suburban and exurban areas; they show peaks in growth in 1960 and 1970, but the rate of growth lessens thereafter. Warren County and Lincoln County, the light blue and orange lines, represent the exurbs; they show the strongest growth in 1980 or later. 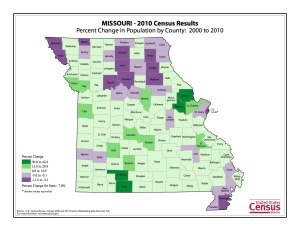 In addition, they show that population loss is not unique to urban city centers. Population loss has been persistent in the Missouri Bootheel and across large portions of Northern Missouri.

The data for the graph of historical population change in counties in the St. Louis Region were assembled from sources available at the website of the U.S. Census Bureau. County population statistics for 1900-1990 are available at County Population Census Counts 1900-1990, http://www.census.gov/population/www/censusdata/cencounts/index.html.

For the 2010 census, population by county is available by selecting “Estimates for All Counties,” on the Missouri QuickLinks page of the American FactFinder, U.S. Census Bureau, http://quickfacts.census.gov/qfd/states/29000lk.html.

The maps came from these two sources:

By mogreenstats in Population on 2013/08/08.
← Missouri Population Growth Lags the Nation Sprawl →