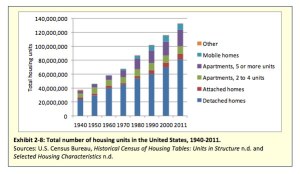 From: EPA, Our Built and Natural Environments, p. 13.

The built environment consists of the human-made surroundings that provide the setting for most human activity, ranging in scale from buildings and parks to neighborhoods and cities. It includes the infrastructure that goes along with such space, such as water supply, transportation networks, and energy networks. Residential buildings are one important part of the built environment.

The first chart at right shows the total number of housing units in the United States from 1940-2011. The total number of units has grown from just under 40 million to over 130 million. It grew by more than 200% There are more detached homes than any other type of housing, and they have accounted for the largest portion of the increase. 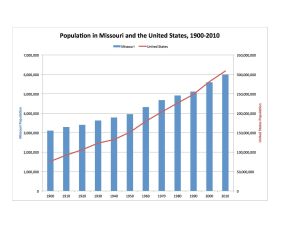 The number of units grew more than did population. The second chart at right is one I gave you in a post about population growth in the U.S. and in Missouri. Between 1940 and 2010 United States population grew by about 130%. Housing units grew faster than population.

At the same time, the floor area of the average new home has increased. The third chart shows the average floor area for homes in four regions around the United States from 1973 to 2010. For the entire U.S., there has been a 42% increase. The Northeast had the largest increase, at 64%; in the Midwest, the increase was 40%. 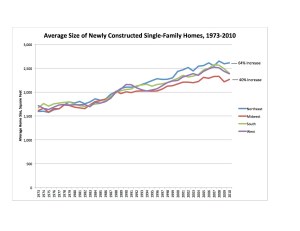 You’d think that data on the average size of new homes in Missouri would be available, but I haven’t found it yet. The federal government’s survey of new construction locates new homes in 1 of 9 census divisions, but that lumps Missouri with states like North Dakota, probably not a good match. I’ll update this post if I find data specific to Missouri.

The charts for the total number of housing units in the United States is from Our Built and Natural Environments: A Technical Review of the Interactions Among Land Use, Transportation, and Environmental Quality, Environmental Protection Agency, http://www.epa.gov/smartgrowth/built.htm.

The chart for population in Missouri is from a previous post in this blog: Missouri’s Population Growth Lags the Nation.

The chart for floor area of the average new home is from Characteristics of New Housing, U.S. Census Bureau, http://www.census.gov/construction/chars.