In the U.S., more water is consumed for power generation than any other use. Irrigation is second. Water consumption has grown slowly between 1985 and 2005. The details are in my three previous posts.

The first chart at right shows what all that water was used for. About 70% of it was used for power generation, about 16% of it for irrigation, and about 9% of it for public supply.

The variation in water consumption between counties is astounding. Franklin County, the largest consumer, used 3,398 times as much water as Webster County, the smallest. The 10 largest consuming counties consumed 76% of Missouri water, but hold only 43% of the population.

The second chart at right shows them and color codes them by region. The largest nine of them just happen to be the counties in which the nine largest coal burning power plants in Missouri are located. The tenth, Butler County, has a power plant, but it is not one of the bigger ones in the state. Butler County, however, is one of the state’s largest consumers of water for irrigation. 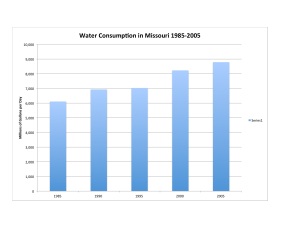 For water consumption, the following reports were used to create the charts. They are all available on the United States Geological Service website at Water Use in the United States, http://water.usgs.gov/watuse.

For population, the following sources were used: