Decades of Development Near Protected Lands

In my previous post, I reported on a study by Radeloff and 7 others that shows that the number of housing units in or near federally protected areas has grown dramatically since 1940. The study showed that the raw number of housing units within 50 km. of Missouri’s Mark Twain National Forest had grown by over 400,000. However, because of the fragmented nature of the forest, about 1/3 of Missouri, including Springfield and Columbia, are within 50 km. of the forest. 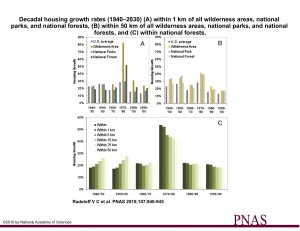 Graph “B” shows the percentage growth of housing in or within 50 km. of protected lands. It grew faster than the national average throughout the entire period.

Graph “C” shows the percentage growth of housing at various distances from national forests. Notice how, in the first two decades of the graph, housing grew most rapidly 25-50 km. from the protected land. But beginning in 1960s, and especially during the 1970s, housing closer to the national forests started growing faster.

Notice also that the darkest green bar represents housing growth within the national forest itself. It has been growing steadily at a rate of about 20% per decade, except for the 1970s, where it exploded by more than 50%. The number of housing units within national forests rose from 335,000 in 1940 to 1,278,000 in 2000.

In a previous post I noted that intact forestland was one of two types of land that was especially rich in providing ecological services that are essential for life. Other reports have noted that the raw amount of forest land in the United States has increased over the last several decades (for instance, see Land Use Change In Missouri). However, the Radeloff et al. study raises the question of whether those forests are getting hollowed out. If so, they would be something like the empty buildings in metropolitan city centers – there for all the world to see, but supporting nothing.

On the other hand, there are cautions that need to be considered in approaching this data, and I will look at one in my next post.