Home » Air » Ozone on the Rise in the Mid-Troposphere

Ozone on the Rise in the Mid-Troposphere

Ozone is on the rise in the mid-troposphere (10-16,000 ft.), and the source traces back to China and India. This contrasts with the air quality index, of which ozone is a principal component, which has improved around most major metropolitan areas.

Ozone is a complex subject. High in the stratosphere it is good because it absorbs ultraviolet radiation. A decline in stratospheric ozone became a concern several years ago (the ozone hole). But at ground level ozone is harmful. It is a powerful oxidizer that is harmful to most living matter.

But could industrialized areas create so much ozone precursor that it rises in the atmosphere, traveling to distant places and forming ozone there?

The graphic at right shows the level of ozone measured at Mauna Loa and Hilo, Hawaii. Mauna Loa is 11,145 ft. above sea level, Hilo is at sea level.

First, notice that there is a yearly peak and a yearly trough, representing the difference between summer and winter. Second, notice that the ozone level on Mauna Loa increased over the time period, but the level at Hilo did not.

This finding parallels the results from another study that used an airplane to repeatedly measure the ozone level over the western United States. 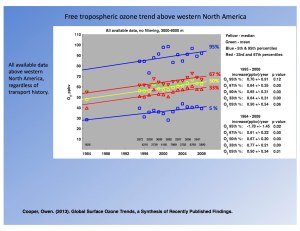 Let’s stay with just the median of the yearly measurements (yellow). It has climbed significantly, from below 50 ppb. to over 60 ppb.

These measurements were taken 10-16,000 feet above the earth, similar to the height of Mauna Loa. Interestingly, the study failed to find a similar increase in ozone at lower levels, mirroring the results in Hilo.

The authors concluded that the ozone over Hawaii and the western United States is being formed from a mixture of local sunlight and precursor gases that originate in India and China.

In the third graphic at right, the maps on the left shows a plume of increased ozone readings that originates in Asia, and which extends completely across the Pacific Ocean.

Thanks to Dr. Jack Fishman of St. Louis University who got me started on background air pollution. He has a paper in review that compares the ozone level of air entering and exiting the St. Louis region, and the impact of ozone on plants in this area. I hope to report on it once it has been accepted for publication.

The graphics above come from a PowerPoint presentation: Cooper, Owen. (2013). Global Surface Ozone Trends, a Synthesis of Recently Published Findings. Given at the NOAA GMD Global Monitoring Annual Conference, May 21-22, Boulder, CO. http://www.researchgate.net/publication/41103085_Increasing_springtime_ozone_mixing_ratios_in_the_free_troposphere_over_western_North_America/file/32bfe50e5aeebd8bce.pdf.

By mogreenstats in Air on 2014/04/24.
← The Best Is Better, but the Worst Is Worse Summary of Background Air Pollution →