In recent years, a startling increase in the number of earthquakes in the Central United States has occurred. Between 2010 and mid-2011, hundreds of small earthquakes occurred in North Central Arkansas, around the town of Guy. Another affected area has been Central Oklahoma. From 1975 to 2008, this area averaged 1-3 earthquakes of magnitude 3.0 or larger. But since 2009, more than 200 have struck the area, an increase of more than 16 times the usual number. 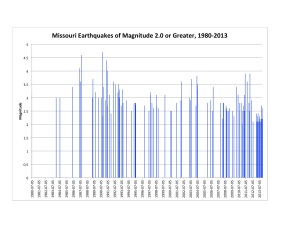 There is some speculation that the swarms may be related to hydraulic fracking to recover natural gas and oil, or alternatively, to injection wells into which wastewater from fracking is injected. Though I mention the speculation, my reading suggests that the cause of midwestern earthquake swarms are not well understood. Northern Arkansas, in particular, was hit by a swarm of thousands of small earthquakes in the 1980s, well before fracking started.

I thought it might be interesting to see if Missouri has been hit by a similar increase in small earthquakes. The United States Geological Society (USGS) keeps a database of earthquakes. You can’t search the database by state, but you can specify a square and search within it. I searched for a square that approximated Missouri (see below for specifics), for the years 1980-2013, and for earthquakes magnitude 2.0 or larger.

The result surprised me. The search returned 45 earthquakes. The first chart at right shows them by their date and their magnitude. (Although the X axis begins in July, 1980, the date of the first one, my search started in January, 1980. Excel very stubbornly insisted on starting the X axis when it wanted to, not when I did.) The chart shows that in recent years earthquakes have been more frequent.

Another way of looking at the same data is to count the number of earthquakes occurring each year. The second chart at right shows the frequency chart. Many years have none at all. But two of the last three years show a significant increase. It is nowhere near as dramatic as in Arkansas or Oklahoma, but there it is.

Did you feel any of them? Where have these earthquakes been? The map at right shows their locations. Most of them were in the middle-to-eastern Ozarks, with a heavy cluster in the region of the New Madrid Fault.

USGS. 2013. “Earthquake Archive Search & URL Builder.” http://earthquake.usgs.gov/earthquakes/search. On this data portal, I searched for magnitude 2.0 or greater earthquakes using 1980-01-01 12:01:00 as the starting time and 2013-12-31` 11:59:59 as the ending time. I searched for a rectangle that approximated the State of Missouri, using 40.4891° as the northern boundary, 36.4985° as the southern boundary, -91.6478° as the western boundary, and -89.0994 as the eastern boundary. I selected this eastern boundary, even though it included some of Illinois, because I wanted to capture the portion of the New Madrid Zone in Missouri. I selected this western boundary, even though it omitted portions of Northwest Missouri because I wanted to omit the recent earthquake swarm in Oklahoma. I omitted the Illinois earthquakes from the data reported above, though they are shown on the map.

By mogreenstats in Land on 2014/05/29.
← Is Missouri Exempt from Abrupt Climate Change? National Academy of Sciences Publishes Primer on Climate Change →