Brentwood, a suburb of St. Louis, has completed and published a municipal greenhouse gas inventory. The inventory studied community emissions and emissions from government operations for the baseline year of 2010. The latter are a subset of the former, but municipalities break them out separately because they have direct control over their own emissions, while they can only influence community emissions indirectly. Many municipalities also want to demonstrate leadership on the issue. 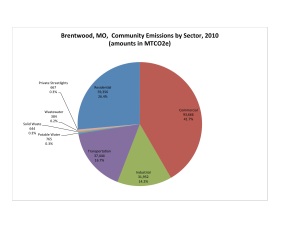 Total Brentwood community emissions were 224,878 metric tons of carbon dioxide equivalent (MTCO2e). According to the report, Brentwood had a residential population of 8,025 in 2010, yielding per capita emissions of 28.02 MTCO2e/person.

The first chart at right shows community emissions by sector. The commercial sector was largest, accounting for over 40% of total emissions. The residential sector and transportation sectors were second and third largest. The streetlight sector represents a few privately lighted streets. The second chart at right shows community emissions by source. Almost 3/4 of Brentwood’s emissions derived from the consumption of electricity. Transportation fuels, gasoline and diesel, together accounted for 16.65% of emissions. Natural gas consumption accounted for only 10.4% of emissions. 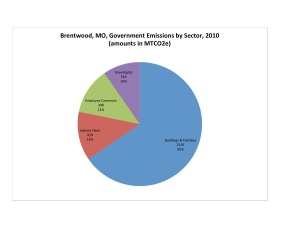 Brentwood operates a recreation center with an ice rink. This facility alone consumed 2.2 million kWh of electricity, more than 2/3 of the electricity consumed by all Brentwood government buildings.

Morlen, Ron. City of Brentwood, Missouri, Community and Local Government Operations Greenhouse Gas Emissions Inventory, 2010. As of this writing, this document is not published on the web. Contact the City of Brentwood for a copy.

By mogreenstats in Climate Change, Greenhouse Gas Emissions on 2014/07/17.
← Off-Site Impacts from Abandoned Mine Lands Columbia Emissions Down More Than 14% →