Why is it so cold? Isn’t there this thing called global warming going on? 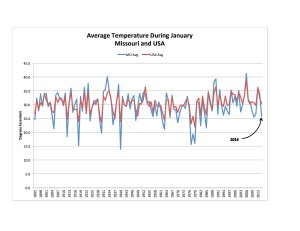 First, it is not as cold as we all may think. There may have been days of bitter cold, but there were also days of unusual warmth: for instance, in St. Louis, Kansas City and Springfield the temperature hit 60, 57, and 62°F, respectively, in January 2014. The same thing may happen in 2015 before January is over.

For Missouri as a whole, during January 2014, the average temperature was 25.9°F, only 3.9° colder than average, ranking it as the 22nd coldest January in the 120 years since record keeping began (see first chart at right). For comparison, the coldest January in Missouri averaged 13.9°F, 12° colder. For the United States as a whole, January 2014 was slightly warmer than average, at 30.54°F, the 55th warmest on record. 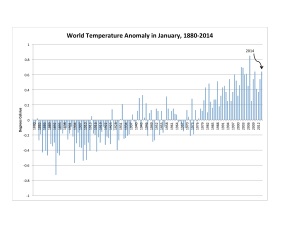 For the entire world, the average temperature for January 2014 was 0.64°C warmer than the long-term average, making 2014 the 5th warmest January on record (see second chart on right). Unfortunately, the Climate at a Glance data portal does not provide actual global temperature time series, only anomaly time series. 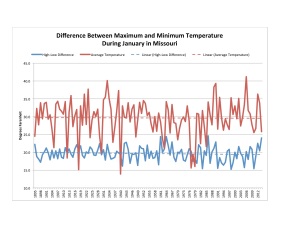 The blue line in the chart shows the difference between the highest temperature and the lowest temperature during January. This is a measure of how variable our temperature is from day-to-day. The dashed blue line shows the trend. Overall, the difference between the high and low is decreasing slightly, but that disguises what’s really happening. During the first half of the 20th Century, there was relatively little variation between years, the highest and lowest temperatures during January didn’t differ by too much. But since the 1960s, the peaks and valleys of the blue line have spread out, meaning that some years there is less than usual variation, some years there is more than usual. Some years January is pretty “all-the-same,” and other years it is “all over the place.”

What does this mean? I don’t know. It would be a great topic for a research paper. I do know that there is an explanation for the “all over the place” years, and that will be the subject of the next post.

Source for January 2014 and January 2015 high and low temperatures in St. Louis, Kansas City, and Springfield, MO: The NOW/data database published by the National Atmospheric and Oceanographic Administration. To access the NOAA Local Forecast Office for each city, google “weather [city name]. Select the option with the URL that begins “www.crh.noaa…” On the webpage of the forecast office, in the column on the left, select “climate:local.” On the Local Climate webpage, select the “NOWdata” tab.Use the query portal to define your search. I searched for the St. Louis, Kansas City, and Springfield Areas, Daily Data for A Month, and 2014-01.