What timing! Two weeks ago I put up a blog post saying that the January cold snaps this year and last year didn’t mean that it was really as cold as it seems. Then, two days later (1/17/15), the temperature in St. Louis topped out at 63°F, just to prove my point. And then, on 1/19/15, the National Climate Data Center (NCDC) published temperature data for calendar year 2014.

Anomalies are shown in °C.

It turns out that globally, 2014 was the hottest year since record keeping began in 1880. The first chart at right shows the data. The NCDC publishes this data as temperature anomalies. That is, they compute the average temperature for the 20th Century (1901-2000), and show how much each year differed from the average. The graph shows a very clear trend from cooler to warmer, and this is the trend that climate scientists interpret as global warming.

The global temperatures are shown in degrees Celsius, because those are the units used around the world. The coldest year was 1911, at an anomaly of -0.44°C. The warmest was last year, 2014, with an anomaly of 0.69°C. Converting Celsius to Fahrenheit, 2014 was about 2.03°F warmer than 1911. It’s not a very big difference, but if you consider that it is spread over the entire surface of the earth, it represents a LOT of energy! 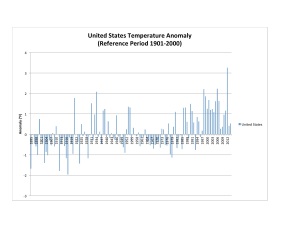 Anomalies are shown in °F.

For the contiguous United States, 2014 was warmer than average, but not extraordinarily warm. That wobbly Polar Vortex I wrote about in the previous post kept the temperature down in some parts of the country (like Missouri, see below). The data is shown in the second chart at right. The temperature anomalies are shown in degrees Fahrenheit, because those are the units we use in the USA. The anomaly in 2014 was 0.53°F, making it the 34th warmest year on record.

For Missouri, 2014 was cooler than average, with the temperature anomaly of -1.6°F, making it tied for the 9th coolest year on record.

The data provide a great example that you can’t judge what’s going on around the globe by what is happening locally. 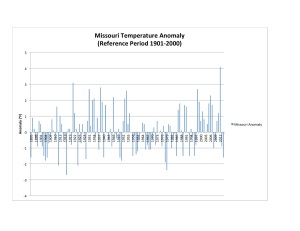 Anomalies are shown in °F.

It would be so easy to get the idea that global warming had abated if you only considered Missouri or the Midwest. But you’d be wrong.