The Office of Highway Policy Information publishes two data sets on vehicle miles traveled (VMT). The first is a monthly set of preliminary estimates. The data are not error-checked, but are current to within three months. It does not contain a historical data series for the states, though you could use it to construct one yourself.

The second set consists of processed data that has been fact-checked and adjusted to reflect missing data, etc. As of this writing (2/19/15), it is only current through 2011, however it contains data series for the various states. For reasons I don’t understand, the two data sets do not match. 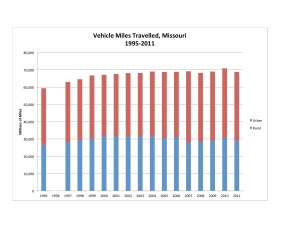 Thus, one must not combine data from them. The previous post used the preliminary data, this post uses the processed data.

The trend has been different between rural and urban areas, as shown in the table below. Rural VMT actually declined between 1999 and 2011, whereas urban VMT increased almost 9%.

Vehicle Miles Traveled in Missouri (in Millions of Miles) 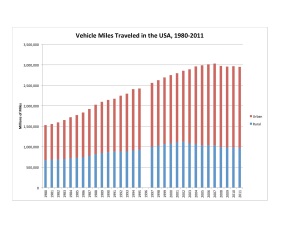 The trends in Missouri don’t match those for the entire United States. The second chart at right shows the data for the USA. There, you can see that VMT peaked in 2007, and declined after that.

Some economists regard VMT as an indicator of economic activity: they expect it to increase more during prosperity and increase less during hard times. After all, it takes money to own and drive a car.

On the other hand, the decrease starting in 2007 is the only one in the record, so it is quite rare in modern times. This reflects our driving habits and the increase in population. We drive more, and there are more of us driving.

That Missouri’s VMT did not grow from 1999 to 2007 at the same rate as did the nation’s probably reflects at least two factors. First, Missouri’s economy has grown more slowly than the has the economy of the nation as a whole. Secondly, our population has grown more slowly than has the population of many other states. In both of these ways, we are a “slow growth” state, and as a result, our VMT has not increased as much as has the national VMT.

The role of population and economic growth in VMT raises a couple of interesting questions: how have per capita VMT and VMT per unit of economic production changed over time? I’ll look at these two questions in upcoming posts.