Vehicle Miles Traveled Per Capita and per Unit of Economic Activity

The previous two posts have looked at vehicle miles traveled (VMT) per year in the United States and in Missouri. In Missouri VMT plateaued in about 1999, then declined slightly in 2010. Nationally, VMT grew until 2007, then declined into 2013, at which point it began increasing again. As noted in the previous post, VMT is related to economic activity and population, and this post takes a closer look at the relation between them. 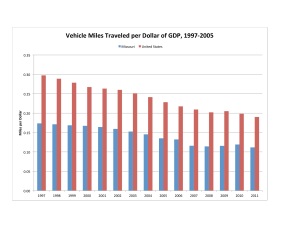 It takes money to own and drive a car, and in addition, some of the VMT come from trucks transporting goods. Though nationally VMT grew very persistently until 2007, many experts believe that it increases less during hard times than during prosperity. One can compute the number of miles driven per unit of economic activity by simply dividing VMT by Gross Domestic Product. The first chart at right shows VMT per dollar of GDP for Missouri (in blue) and for the United States (in red).

The first thing that jumps out at you is that the miles driven for Missouri are significantly less than for the United States. This was an unexpected finding, at least for me – I anticipated that it would be roughly the same. Someone somewhere must be doing a whole lot more driving than we are doing in Missouri. I’m not sure what the difference relates to, my best guess would be long haul trucks shipping goods across country using either I-40 or I-80, which cross other states, but not I-44 or I-70, which cross Missouri. That is just a guess, however.

The chart shows that for both Missouri and the United States there is a clear declining trend. It is taking us fewer VMT to produce a dollar of economic goods than it used to. This data is not corrected for inflation, however, which would tend to create a similar effect. 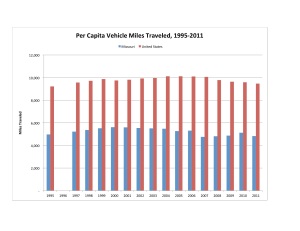 Population is related to VMT because the more people there are driving, the more miles we are likely to drive. The second chart at right shows the number of VMT per capita for Missouri and the United States.

Here again, the first thing that jumps out at you is that the per capita miles driven for Missouri are significantly less than for the United States. Missourians are driving about half as many VMT as the nation as a whole. Such a large discrepancy cries out for explanation. It would make a great research paper.

The chart begins 4 years earlier than the previous one, and its shape is different. In Missouri, per capita VMT began plateauing in about 2000, then started declining in 2005. For the nation as a whole, it increased until about 2005, after which it began declining.

From an efficiency perspective, it is great that we are driving fewer per capita VMT, and that it takes fewer VMT to produce a unit of economic output. Without these changes, the amount of pollution and GHG emissions from vehicles would be even larger than they are. However, the amount of pollution released depends on the total amount of VMT, not the amount per capita or per unit of economic output. After a couple of years of very small decreases, total VMT has started to increase again. That’s a pollution problem, and a problem for climate change.

For population: as I often find when using data from the Census Bureau, to get time series for the dates and locations I want, I often have to mash-up data from several different publications. For this post I used:

Monthly Estimates of the United States Population: April 1, 1980 to July 1, 1999, with Short-Term Projections to November 1, 2000. https://www.census.gov/popest/data/national/totals/1990s/tables/nat-total.txt.

Table 1. Intercensal Estimates of the Resident Population for the United States, Regions, States, and Puerto Rico: April 1, 2000 to July 1, 2010. http://www.census.gov/popest/data/intercensal/national/nat2020.html.

For United States GDP: National Income and Product Accounts Tables, Bureau of Economic Analysis. http://www.bea.gov/iTable/iTable.cfm?ReqID=9&step=1#reqid=9&step=1&isuri=1. This is a data portal. Choose “Section 1 – Domestic Product and Income.” From the list that pops up, choose “Table 1.1.5. Gross Domestic Product (A) (Q). On the page of data that opens, click on “Modify” to select the parameters of the table.