Hazardous Mine Lands – Comparisons Between States 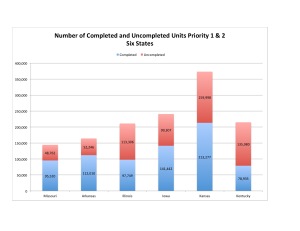 The first chart at right shows the number of Priority 1 and 2 units for Missouri and 5 neighboring states. Blue represents completed reclamation, red represents uncompleted. Don’t forget that a unit can be acres of spoiled land, individual buildings or structures, hazardous bodies of water, vertical openings, or dangerous highwall, so one cannot directly translate number of units to environmental threat or cost to reclaim. 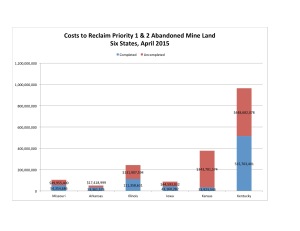 The second chart at right shows the estimated costs to reclaim Priority 1 and 2 sites for those same states. Blue represents completed work, red represents uncompleted. This chart may be a more informative representation of the amount of work accomplished so far, and the amount yet to do. It shows that in terms of costs, Missouri has completed more than half of the work required to reclaim its high priority sites. Arkansas has completed about 2/3, Illinois not quite 1/2, and Iowa not quite 1/2. Kentucky, a big coal mining state, has had a larger reclamation challenge, but even they have completed more than half of the work. Kansas, on the other hand, has completed not quite 1/10 of the work. They are just getting started. (e-AMLIS Database, 2015)

The third chart at right shows changes in the number of uncompleted units and uncompleted costs (Kentucky is not included in this one). Missouri and Iowa had an increase in the number of uncompleted Priority 1 and 2 units, while the other states had a reduction. All states except Kansas had a reduction in the estimated costs to reclaim them. (e-AMLIS Database, 2015) Since Missouri reclaimed 4,895 units during 2014 (Alton Field Office, 2015), the number of units could increase only if new lands were classified as Priority 1 or 2, or if, upon closer inspection, single units were split into multiple units. The data does not say which occurred.

In my next post, I will report on some other interesting facts in the most recent reports on abandoned mine lands.

Office of Surface Mining Reclamation and Enforcement. e-AMLIS Database. For this post I clicked on the Summary tab. The summary provides data on high priority sites only. I then used the drop down menu to select individually each state I wanted to study. I downloaded the data on 4/14/2015.

Alton Field Division, Office of Surface Mining Reclamation and Enforcement. 2015. Annual Evaluation Report for the Regulatory Program and the Abandoned Mine Land Program Administered by the State Regulatory Authority of Missouri. U.S. Department of the Interior. http://apps.dnr.mo.gov/env/lrp/docs/Missouri2014AnnualEvaluationReport.pdf.