This post is Part 1 of a series on Drought in California. Part 2 will be published next week. The type of analysis I am attempting, and the data I am having to use, have some problems and some limitations. You can read about them in the introduction to the series.

Development in California and in other western states has been possible because of extensive exploitation of water resources. California is in the midst of a severe multi-year drought. Due to climate change, drought is predicted to become the “new normal” for California. Demand for water is already outstripping supply, and if current trends continue, the imbalance will increase.

California will have to develop new water resources and reduce consumption. Desalination looks like the only possible new water resource at this time, but it will come at a significant cost. The combination of increased costs and efforts to conserve water are likely to negatively impact California’s economy and the lifestyle for which it is famous.

California’s agriculture sector will be especially hard hit, resulting in farm failures, unemployment, and dislocations that will be reminiscent of the Dust Bowl, though less severe.

The risk is that the combination of these effects could cause a deflationary spiral to occur in the value of assets located in California. There may be a halt in immigration, and perhaps even a significant outmigration.

Drought and the California Climate 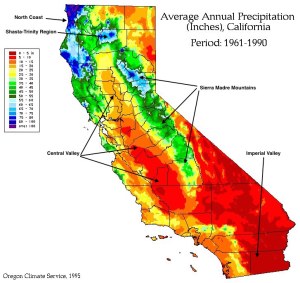 California is experiencing a significant drought. While the current drought is especially severe, there are many indications that drought may not be a temporary condition. The 20th Century was an abnormally wet period for California, and the region may be returning to long-term averages.

California is probably the most varied state in the country. It boasts the highest mountain in the contiguous 48 states (Mt. Whitney), and the lowest land location in North America (Death Valley). It is the most populous state in the country, but it also has desert regions where few, if any, people live. It has snowy peaks that in some years receive prodigious amounts of snow, and the driest land in the country.

The wet areas include the North Coast, the Shasta-Trinity Region, and the Sierra Nevada Mountains (marked on Figure 1). They typically receive at least 25 inches of precipitation per year, and in some locations 100 inches or more! Much of Southern California is outright desert, receiving less than 10 inches of precipitation per year (the red areas in Figure 1). The dry regions include significant portions of the Central Valley and the Imperial Valley, two of the state’s most important agricultural areas. These regions are marked in Figure 1.

Exacerbating the dry nature of Southern California is the monsoonal nature of the precipitation. Most of it falls from November through March. From April through November, precipitation in the southern part of the state ranges from about 4 inches (Central Valley) to less than 2 inches (southeastern desert). Such a precipitation pattern can only be survived by humans via access to other sources of water: rivers, lakes, reservoirs, and wells. 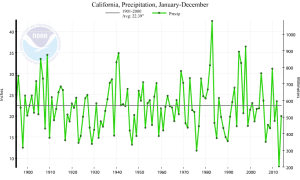 Drought is a function of soil moisture. Low precipitation leads to low soil moisture, but so do sunshine and heat. They dry the soil more quickly, leading to longer and more intense droughts. A look at precipitation for the state as a whole indicates that since records were first kept (1883), there have been drier periods alternating with wetter periods. Starting with 1984, 20 out of 30 years have seen lower than average precipitation in California, and 2013 was by far the driest on record. This contrasts with 1978-1983, which were all above average precipitation years. 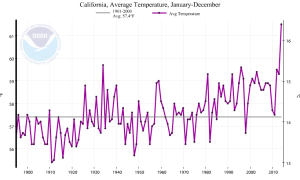 The average annual temperature statewide has increased about 2°F since 1893. (Figure 3) Over the longer term, climate paleontologists tell us that California has been repeatedly subject to droughts that “can go on for years if not decades, and there were some dry periods that lasted over a century, like during the Medieval period…The 20th Century was unusually mild here, in the sense that the droughts weren’t as severe as in the past. It was a wetter century, and a lot of our development has been based on that.” (Ingam, 2014) 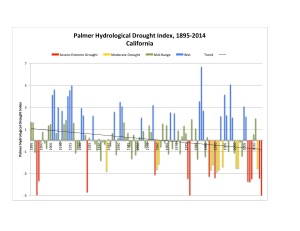 Figure 4 shows that California has experienced increasing drought over the time during which records have been kept. It shows Palmer Hydrological Drought Index Levels for California from 1883 to 2013. Blue means wet, green means about average, yellow means moderate drought, and red means severe, extreme, or exceptional drought. Even a quick glance shows very few yellow and red columns on the left side of the graph, but a great many on the right side. California has experienced more drought in the last 30 years than at any time since 1883. 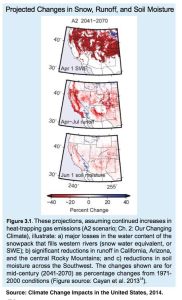 Unfortunately, the trend is projected to continue. Due to climate change, temperatures in California are projected to increase by 3.5-4.5°F on average by mid-century. (U.S. Global Change Research Program, 2014) Projections for precipitation are more uncertain, and may vary by region. Projections agree, however, that the snowpack will be adversely impacted. Because of the monsoonal nature of California’s precipitation, the state is dependent on the snowpack for its water. The spring snowmelt is the most important water source for recharging the state’s aquifers and reservoirs. Figure 5 shows that a 40% decline in the water content of the snowpack is projected by mid-century (top map). This would result in a > 30% decline in runoff during April-July (middle map), and a decrease of about 20% in soil moisture on June 1 (bottom map).

The combination of increased temperature and decreased snowpack is expected to result in significantly increased levels of drought in much of California compared to the late 20th Century. If these predictions are accurate, California’s problems with drought are just beginning, and will become significantly more severe over time.

The next post will explore the status of California’s current water resources.