This is the sixth post in my series Drought in California. In Part 1: California Climate and Drought, I found that drought is projected to be the “new normal” climate in California. In Part 2: The Status of California’s Current Water Resources, I found that California is already depleting both it’s groundwater and surface water resources. In Part 3: California’s Total Water Deficit, I constructed an overall estimate of California’s future water deficit, concluding that it will be about 25.1 million acre-feet per year, about 39% of California’s current dedicated water supply. In Part 4: The Potential to Procure Additional Ground and Surface Water, I found that a variety of obstacles and problems made it unlikely that California could cover the predicted future water deficit by tapping additional groundwater or surface water resources. In Part 5: The Potential of Desalination, I found that using desalination to cover the projected water deficit was within the realm of conceptual possibility. However, it would involve a massive infrastructure construction program. Whether such a program could be completed within the needed time frame was unknown. Further, desalinating such a large volume of water would have an annual cost roughly equal to 1% of California’s total GDP.

This post will examine the potential for water conservation by limiting population growth and by limiting environmental uses of water. At the beginning of each part, I have noted that there are problems with the type of exercise I’m attempting, and problems with the data and analyses I’m having to use. If you want to read more about them, see the introduction to the series.

The Basics of Water Consumption

Figure 5b: Distribution of the Dedicated Water Supply. Data source: California Department of Water Resources (b).

Water consumption gets a bit complex, and one needs a little foundation to understand it. The water literature uses several terms to discuss water use. Total supply is all of the water that comes into the state, by whatever route Dedicated supply is that portion of total supply that is available for human use. Withdrawals refer to water taken from the dedicated supply and used for human purposes. Consumptive withdrawals are used in a way that makes the water unavailable for use in the same water basin. Such a use might involve evaporation, conversion to steam that is lost to the atmosphere, or contamination. Non-consumptive withdrawals return the water to the basin in a way that it can be used again. An example might be irrigation water that either sinks into the ground and then into an aquifer that is tapped by wells, or that flows into a collection pond from which it is used again.

In Part 2 of this series I reported that the California Department of Water Resources estimated dedicated supply to be 65.1 million acre-feet in 2001, a dry year. Figure 5b, repeated from that post, shows the uses to which that water was distributed. 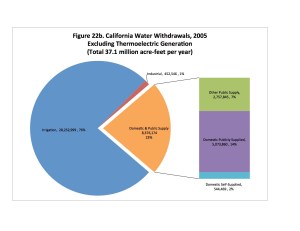 Why have I netted out water withdrawn for thermoelectric generation? Because it is one of those non-consumptive withdrawals discussed above. Nuclear and coal power plants use huge volumes of cooling water. The cooling water is typically returned to the environment. It may cause local problems because it is hot, but it is not usually otherwise polluted. In this sense, it is used, but not consumed.

Could California reduce water consumption by limiting population growth or by limiting the amount of water returned to the environment?

Figure 23. Decadal Population Growth Rate of California and the United States. Data source: U.S. Census Bureau a and b.

To conserve water, California could enact policies to reduce, halt, or reverse population growth. The idea would likely encounter significant resistance, however. Businesses and governments generally assume population decline to be socially and economically destructive, and over the last several decades several countries around the world have taken steps to reverse slowing rates of population growth because of these concerns. (Coleman and Rowthorn, 2011) In addition, policies to limit population growth fairly and equitably would be complex to devise. Some policies, such as the one child policies in China and India, have been oppressive, if not brutal.

It seems unlikely that California will voluntarily enact policies to intentionally limit population growth; it would be extraordinarily controversial. Besides, only 12% of the projected water deficit was based on population growth, and limiting population would do nothing to address the remaining 88%.

I personally believe, however, that the projected water deficit facing California will cause an involuntary reduction in California’s population. I believe that California will become a much less desirable place to live or to locate a business. There will be a net outmigration, just as there was a migration out of the Midwest during the Dust Bowl. This possible scenario will be discussed in more detail in a coming post.

Returning Water to the Environment

The estimate of dedicated supply (65.1 million acre-feet, see Part 2 of this series) is larger than the estimate of net withdrawals by 28 million acre-feet. That’s a lot of water! There are several reasons for the difference. First, supply is different from consumption; the estimates are constructed using entirely different data sets. You wouldn’t expect them to agree perfectly. Second, dedicated supply was estimated for 2001, while withdrawals were estimated for 2005. While both were dry years, it is likely that the total supply was different, and that affected both dedicated supply and withdrawals. Most important, however, is that 35% of the dedicated supply was returned to the environment for environmental remediation purposes. The supply data from the California Department of Water Resources included this water, but the USGS data on withdrawals did not.

From time-to-time I read a proposal that to solve the water deficit, California should simply stop using water for environmental purposes. Of California’s 65.1 million acre-feet of dedicated supply in 2001, some 22.4 million acre-feet of it were used for environmental purposes. That is close to being enough to cover the future deficit I projected.

There would be problems with this proposed solution, however. For instance, the largest single environmental return is water diverted into the San Francisco Bay Delta. In their natural states, the Sacramento and San Joaquin Rivers provide sufficient flow of fresh water through the delta into San Francisco Bay to prevent ocean water from the bay from intruding into the delta. However, so much water has been diverted from these streams that ocean water threatens to intrude. The water in the California State Water Project that is destined for Southern California is discharged into the delta by the Sacramento River, flows across the delta, and is sucked up by huge pumps on the other side, lifting it into the California Aqueduct, and sending it south. If water were not returned to the delta, salt water would contaminate the water destined for Southern California. Even with water returns, the drought has reduced water flow through the delta to the point that the California State Water System is having to construct an emergency barrier in the delta to prevent salt intrusion. (California Department of Water Resources, 5/29/15)

The situation with the delta is an example of a general principal: water returned to the environment is not wasted, it is used to prevent serious environmental damage. Now, there are places around the world where people have chosen to proceed with unwise water diversions, and they have devastated the environment as a result. Perhaps the Aral Sea is the most dramatic example. Once the world’s fourth largest lake, it has been reduced by water diversion to a small fraction of its former extent. The entire region’s climate has been adversely effected, thousands of square miles of barren salt flats have been created, the regions economy has been devastated, and Kazakhstan has begun an expensive emergency program to try to restore the sea. It has been called one of the world’s worst environmental disasters. (Wikipedia, Aral Sea)

California already over-withdraws water from its rivers, causing environmental damage. Would the state choose to turn itself into another Aral Sea? Would it be allowed to do so? I doubt it. I do not believe that significant additional water can be obtained by taking it from the environment.

Thus, it seems unlikely that California will pursue a policy to voluntarily and intentionally limit population. And it seems clear that California cannot pursue a policy of withdrawing additional water from the environment without serious environmental harm. “Environmental harm,” of course, is a euphemism for some really unpleasant stuff, as they found out around the Aral Sea.

U.S. Census Bureau (a). Part II. Population of the United States and Each State: 1790-1990. http://www.census.gov/population/www/censusdata/Population_PartII.xls.

USGS. Estimated Use of Water in the United States. County Level Data for 2005. http://water.usgs.gov/watuse/data/2005.