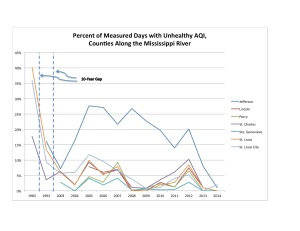 It is one thing to ask whether a county’s air quality is good, and another to ask if it is so bad that it is unhealthy. The previous post focused on good air quality days. This post focuses on the percentage of days with unhealthy air quality.

I looked at data from the EPA’s Air Quality System Data Mart for 20 Missouri counties. The data covered the years 2003-2014, plus the years 1983 and 1993 for a longer term perspective. For a fuller discussion of air quality and the data used for this post, and a map of the 20 counties, see my post Air Quality Update 2014. 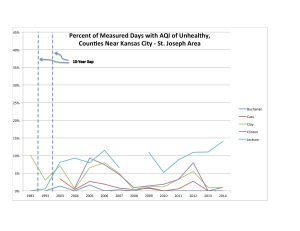 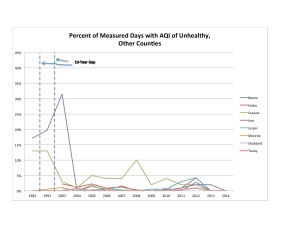 The percentage of unhealthy air quality days increased in only two counties: Jackson County and the City of St. Louis.

The percentage of unhealthy air quality days was 14% in Jackson County, making it by far the worst performer in the state. No other county had more than 2%. This is the second year in a row that Jackson County has had the most unhealthy air days, and since 2011 the trend has been upward.

It is heartening, and good for the lungs too, that only one county in Missouri had a significant fraction of days on which the air quality was unhealthy. The state clearly has improved its air quality. It is equally clear, however, that in Missouri’s two largest metropolitan areas, air quality is not yet good on the majority of days.

Environmental Protection Agency. Air Quality Index Report. This is a data portal operated by the EPA. Data for 2014, Missouri, and grouped by County downloaded on 11/6/2015 from http://www.epa.gov/airdata/ad_rep_aqi.html.