This post begins a series to update information on toxic chemical releases in Missouri and nationwide. The most recent data is through 2013.

Many industrial processes require the use of toxic substances. These substances must be properly handled to prevent harm to people, land, and water. During the 1970s and early 1980s concerns grew about how toxic substances were being handled. For instance, tons of toxic waste were discovered dumped in the Love Canal neighborhood of Niagara Falls. Oil containing dioxin was sprayed on the streets of Times Beach, Missouri, turning it into a ghost town; people can’t live there to this day. In 1984, a malfunction at a chemical plant in Bhopal, India released a cloud of poisonous gas that killed more than 3,000 people overnight, and 15,000 – 20,000 eventually (5-7 times as many as were killed in the 9/11 attacks). Shortly thereafter, a serious release of toxic gas occurred in Institute, West Virginia. 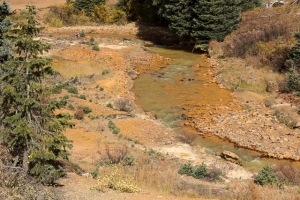 Cement Creek, Colorado, location of a toxic release in August 2015. The natural color of the rocks is grey. Photo by John May.

These concerns are hardly a thing of the past, however; just this summer, an accident at a mine in Colorado released millions of gallons of water contaminated with toxic heavy metals into Cement Creek (photo at right). Cement Creek flows into the Animas River, the only water source for several cities in Colorado and New Mexico. 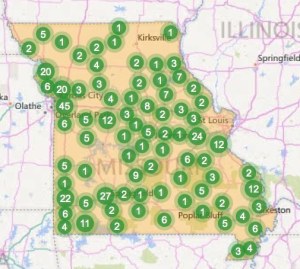 In 2013, 521 facilities in Missouri were covered by the Toxic Release Inventory, and 21,707 nationwide. On the map at right, each green circle represents a county in Missouri, with the number of TRI sites inside the circle. On the map at the TRI website, if you click on a green circle, the name of the county will pop up with some additional information. Unfortunately, the TRI website does not seem to have this map available for download in a form that labels the counties. The three counties with the most sites are Jackson County (45), Green County (27), and Franklin County (24). Having the most TRI sites does not necessarily mean the most toxic releases. One reason is that by far the most toxic waste is managed. 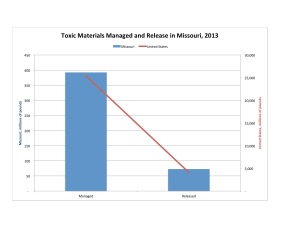 The chart at right shows the data for Missouri and for the United States. About 84% of Missouri toxics are managed, only 16% are released. For the United States as a whole, a slightly higher percentage is managed, but really, the percentages are similar. Even though only 16% of toxic materials are released in Missouri, that still amounts to 72 million lb. In the following posts I’ll look into the releases in more detail.

By mogreenstats in Toxic Chemicals, Water Pollution on 2015/12/10.
← Summary of Missouri Air Quality in 2014 Lead Is the Most Released Toxic Chemical in Missouri →