Toxic Releases Increased in Missouri in 2013

The last 2 posts have reported specifics on some of the toxic chemicals released into the environment in Missouri in 2013. This post will broaden the view and discuss trends in toxic releases over time. 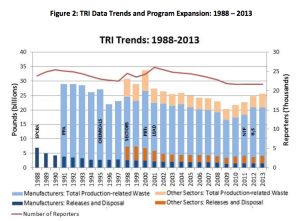 To some extent it is difficult to follow trends over time because of changes in the TRI program. Since the EPA began tracking toxic chemical releases in 1988, on 5 occasions the types of chemicals tracked has been expanded, or the levels at which reporting was required have been tightened. The first chart at right shows the national trend in chemicals reported to the EPA over time. The total amount of toxic chemicals reported to EPA peaked in 2000 and decreased until 2009, the bottom of a recession. Over that period, the amount decreased by more than 40%. Since 2009, however, the amount has increased by about 25%.

It is beyond the scope of this blog to explore why toxic chemicals reported to EPA should drop so significantly, then rebound so significantly. If you know the answer, please comment on this post and let us all know.

The chart shows that most toxic chemicals reported to the EPA are used in manufacturing productions (light blue). Next largest is production from other sectors (light sandy brown).

Well, chemicals reported to the EPA are different from releases, what about releases? In Missouri, releases increased by 3% between 2012 and 2013. Nationwide, they increased by 15%. Nationwide, the increase came primarily from increases in on-site disposal by the metal mining sector. In Missouri (see previous post), the largest increases came from the petroleum and metal mining industries. The second chart at right shows the data for Missouri. It includes only on-site releases, but as they account for 96% of all releases, the chart can be taken as representative of total releases.

The third chart shows the trend for the United States. This chart shows data for total releases. Both charts only go back to 2003. 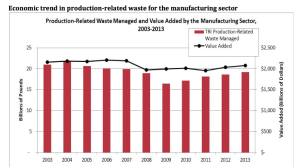 The fourth chart at right concerns the United States as a whole, and it uses economic value added as a proxy for total manufacturing. It also concerns toxic waste managed (red columns), not toxic waste released. With those caveats, the 2 data series do seem to follow each other, though not quite perfectly. For Missouri I found a time series of manufacturing employment, and I am using that as a proxy (fifth chart at right, red line). The chart considers toxic releases (blue line), not toxics managed. 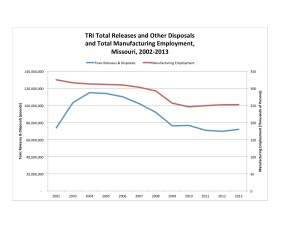 The fifth chart contains an additional year compared to the second, third, and fourth charts: 2002. Notice that between 2002 and 2003 toxic releases in Missouri increased by 40%. Since 2004, releases have decreased by 37%, but it still only puts us back to the level of releases we had in 2002 – no net improvement.

As I noted in the first post in this series, interpreting data in the TRI is complex. The most serious exposures to toxic chemicals probably happen to people who work with them regularly. You can’t assume that releases translate to public exposure. But you probably can infer the inverse: unless there is a release, the public can’t be exposed. These are poisonous chemicals. Lead, the most released chemical in Missouri, persists and accumulates in the environment and in the human body. It is worrisome to have toxic releases on the increase in Missouri and nationwide.

By mogreenstats in Toxic Chemicals on 2015/12/24.
← Lead Is the Most Released Toxic Chemical in Missouri Creve Coeur Shows Progress →