Home » Climate Change » The Wettest Year Ever in the United States

The Wettest Year Ever in the United States

Precipitation varies from place-to-place, however. Figure 2 show precipitation across the country by NCEI Climate Division. It was drier than average in parts of California, the Northwest, and New England. Much of the rest of the country was wetter than average. Regions in Texas, Oklahoma, Kansas, Iowa, and North Carolina had their wettest year ever. On this map, the dark green (wettest year ever) and medium green areas (much above average) correspond to the very wet percentage in Figure 1. 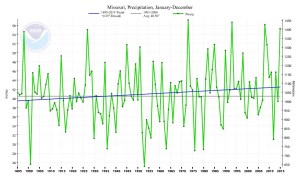 In Missouri, 2015 was the 4th wettest year since 1895. Starting in 1981, 21 out of 35 years have seen above average precipitation. The blue line shows the linear trend since 1895. The trend equates to a 0.25 inch per year increase each decade. Most future climate models show the Eastern United States getting wetter, and the Western United States getting drier. Missouri is near the boundary, and climate modeling has had a lot of uncertainty. At this point, the trend is towards wetter.

There is considerable seasonal variation, however. It is hard to make sense out of the trend for each season. If one half of the year was trending more than the other, I would understand it. But the alternating pattern below is more difficult to understand, and it is possible that the trend is being controlled by individual outlier years:

Figure 4 shows precipitation for the climate divisions in Missouri for 2015. Precipitation throughout the state was well above average everywhere, but it was wettest across Southern Missouri, which received more than 60 inches. The rainfall that resulted in record flooding in some areas occurred in late December. The heaviest band of rainfall occurred along a line almost directly over Interstate 44 from the southwest corner of the state through St. Louis. (Figure 5) 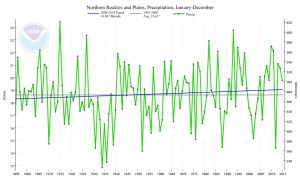 When I look at precipitation, I look at two other regions of the country besides Missouri. First, I look at the Northern Rockies and Great Plains. I look there because it is the source of the Missouri River, the largest source of potable water in Missouri. Figure 6 shows that 2015 was a moderately above average precipitation year in this region. The blue line shows the trend, which has been increasing by 0.06 inches per decade. Compare the less than 20 inches of precipitation in this region with the more than 60 inches across Southern Missouri. This is a drier, but not desert, region.

The other region I look at is California, because of my interest in the drought there. Figure 6 shows California precipitation through 2015. It was the 13th driest year since 1895. The trend shows that California has been receiving 0.05 inches less precipitation each decade since 1895. In December, a strong El Niño weather pattern began bringing increased precipitation to California. It was too late to drastically affect the statistics for 2015, but 2016 may be a better water year there.

National Centers for Environmental Information. 2016a. Climate at a Glance. Data retrieved 1/10/16 from http://www.ncdc.noaa.gov/cag/time-series/us.

By mogreenstats in Climate Change, Weather Patterns on 2016/02/09.
← 2015 the Second Warmest Year Ever in the USA Blog Malfunction. My Apologies! →