Heavy Metals in the Big River

The Big River is a tributary of the Meramec River . Running 145 miles, it drains an area of 955 square miles in east-central Missouri, roughly 14% of the state. Its course runs through Missouri’s Old Lead Belt, a region in and around St. Francis County. For more than a century, Missouri was the leading lead producer in the world, and more than 8.5 million tons of lead were produced from the Old Lead Belt before production tailed off in the 1950s and 1960s. 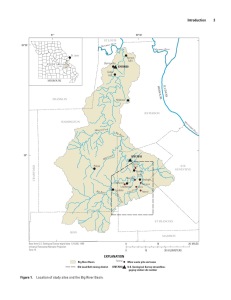 Though mining activities have ended in the Big River Basin, the area is still affected. Six large piles of mine waste remain on the land surface. Together they consist of some 2,800 acres. Figure 1 shows the drainage area of the Big River and the Old Lead Belt mining district. The black dots represent towns, while the red dots show the locations of the six piles of mine waste.

Historically, wind blew dust from these piles into the air, and precipitation washed it into streams, both of which collected into the Big River, which flows near the piles. Because it was (and is) impossible to extract all of the heavy metals from these mine wastes, the dust blown into the river contained heavy metals that posed a threat to human and animal health.

Between 2008 and 2012, the EPA attempted to reclaim the piles by capping them to prevent further erosion. In 2015, the U.S. Geological Survey (USGS) conducted a study of heavy metals in the Big River to assess the results of the capping operation. They studied 4 heavy metals known to have significant toxic effects on humans and animals: barium, cadmium, lead, and zinc. These 4 metals can get into river water in two ways. They can dissolve into the water, like sugar dissolves into your tea. Or, particles containing the metals can get washed into the river. Larger particles (sand-sized and larger) get moved into the river during heavy precipitation, but once the current calms, they sink to the bottom. There, they either tumble downstream along the bottom, or they rest until the next stormflow picks them up again. Fine particles (silt-sized or smaller) eventually settle to the bottom, also. However, they are kept suspended in the water by the current for a longer period of time. Thus, they can travel downstream farther, and they also have a greater chance of coming into contact with humans and animals.

The study developed a lot of information about the Big River at these two locations. I will focus on only a few of the major conclusions.

In considering this study, it is important not to imagine it to be an evaluation of the general water quality of the Big River. The findings reviewed above concern heavy metals carried by the water during stormwater events. There were only a few of these in each year studied. The Missouri Department of Conservation seems to be of two minds about the overall water quality of the Big River: the Department’s website declares the river to “generally have good water quality.” At the same time, however, the Department “classifies the lower 93 miles of Big River as not suitable for aquatic life protection and fishing or livestock and wildlife watering. (Missouri Department of Conservation 2013). This 93-mile stretch would include the entire area in this study, and in fact, the entire area below the Old Lead Belt.

The results of this study seem to indicate that, whatever the quality of the water may be during dry periods, during periods of stormflow, it carries relatively high concentrations of these four heavy metals. The concentrations for all 3 that have established Toxic Effect Thresholds are well above the level at which effects are expected to occur. Capping operations may have decreased the load of the 4 metals carried by the river, but the observed decrease could have come from other factors not related to the capping.