Home » Water » Other Water » Missouri Monitors More of Its Lakes, Less of Its Streams, than the Nation as a Whole

Missouri Monitors More of Its Lakes, Less of Its Streams, than the Nation as a Whole

According to my source, the Department of Conservation does most of the actual water quality monitoring, but it is the Department of Natural Resources that is responsible for preparing the biennial 503 report and submitting it to the EPA. The state was evidently under pressure from the EPA to tighten and improve what EPA regarded as inadequate water quality monitoring. In opposition were lobbying groups representing the farmers, utilities, and other interests.

I thought it might be useful to see whether Missouri was significantly out of step with the rest of the country in terms of the amount of its surface water that is assessed for quality, and in terms of the results of the assessments. 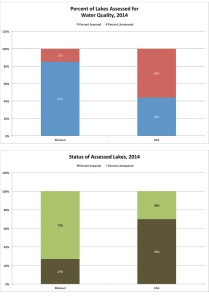 I wouldn’t run too far with this data. There is a lot of controversy over what constitutes clean water. For instance, if at a cove on a lake, the water tests clean 50 weeks of the year, but contaminated 2 weeks of the year, is it clean or impaired? A lot of dollars are on the line, and truth always becomes hard to find in such situations.

At first glance, it is heartening that Missouri assesses such a large percentage of its lakes, but then again, Truman Reservoir, Missouri’s largest lake, has 0.2% of the surface area of Lake Superior. You wouldn’t expect Minnesota to be monitoring the water quality way out in the middle of Lake Superior as intensively as you might expect Missouri to be monitoring the quality of its smaller lakes. Even Kentucky Lake and Lake Mead are 3 times Truman Reservoir’s size.

It is rather disheartening that Missouri assesses such a small percentage of its stream miles when other states seem to be able to do much better.

[Addition 6/19/16: The same acquaintance suggests to me an alternative explanation for why Missouri has surveyed a relatively high percentage of lake acres: Missouri has relatively little lake acreage to survey. All our large lakes are man-made reservoirs, and it may require less effort to survey such a small acreage of lakes. To check this out, I did some quick research on the Internet. Indeed, Missouri is below average in the total number of lake acres, coming in 32nd out of 50 states. This is unusual for such a large state as Missouri, and indeed, only about 1.4% of Missouri’s total area is water. This puts us 40th out of 50 in the fraction of our state that is surface water. Minnesota touts itself as “the land of 10,000 lakes.” Well, that is certainly not us here in Missouri. Perhaps my acquaintance is on to something. Thanks for the suggestion.]

List of Largest Lakes of the United States by Area. Wikipedia. Viewed online 5/28/16 at https://en.wikipedia.org/wiki/List_of_largest_lakes_of_the_United_States_by_area.

By mogreenstats in Other Water, Water, Water Pollution on 2016/06/16.
← Impairment in Missouri’s Lakes, 2014 Per Capita Energy Consumption in Missouri Increases →