Energy consumption is not an environmental topic per se, but it becomes one because so many of the environmental challenges we face derive from the processes we use to obtain energy, and from the emissions that occur when we use it. Climate change, acid rain, air pollution, and mercury contamination all come primarily from burning fossil fuel to create energy. Turning on the air conditioning, flipping the light switch, starting our car – these are how we consume energy and cause all these problems.

Because of the many differences between states, especially population and economic activity, raw comparisons between states are meaningless. To adjust for these differences, I will use per capita comparisons, and comparisons per dollar of Gross State Product. In this post I compare Missouri’s per capita energy consumption to that of four surrounding states. In my next post, I will compare the amount of Gross State Product generated per unit of energy consumed. 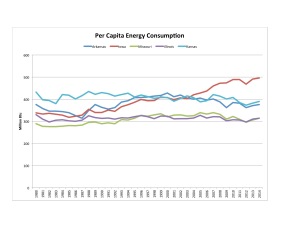 Figure 1 at right shows per capita energy consumption for Missouri and for four surrounding states: Arkansas, Iowa, Illinois, and Kansas. The graph covers the years 1980-2014.

Since 1980, per capita energy consumption has grown significantly in Iowa, and slightly in Missouri and Illinois. It has declined slightly in Kansas, and in Arkansas in 2014 it was precisely the same as in 1980. Missouri began the period as the lowest consumer of energy per capita among the five states, and finished the period tied with Illinois for lowest.

The trend for per capita energy consumption nationally follows the same general shape as in Missouri. It peaked slightly higher, however, and was at 309 million BTU per person in 2014 (compared to 314 in Missouri).

I don’t know for sure why the energy consumption in Iowa has grown while it has declined in the other four states, but by the end of the following post we may have a good guess.

By mogreenstats in Energy on 2016/06/23.
← Missouri Monitors More of Its Lakes, Less of Its Streams, than the Nation as a Whole Energy Consumption per Unit of GDP Decreases in Missouri →