Home » Climate Change » Oroville Dam: When It Rains, It Pours

Oroville Dam: When It Rains, It Pours

If you have been watching the national news, you know that California has had record precipitation for the winter so far. There has been so much rain that one of the state’s biggest reservoirs, Lake Oroville, has exceeded its capacity. Water flowing through the emergency spillway has eroded portions of the dam, threatening a dam collapse that would kill thousands and wipe out communities below the dam. Emergency efforts are underway to repair the dam.

Following are two photos that show just how badly the dam has been damaged. The photos are a bit hard to interpret, but here’s what I think they show: water overtopped the dam into the emergency spillway in amounts that the spillway was not designed to handle. In Figure 1, the water is no longer overtopping the dam, but a huge section of the dam face has been badly damaged. Several channels have been carved down the face of the dam. Figure 2 shows water surging down the damaged main spillway. The spillway is the concrete structure at left. You can see that the water isn’t flowing in it, but rather down a rogue channel that the water has cut in the face of the dam. This actually occurred 2 days after the photo in Figure 1, as the California Department of Water Resources dumped water out of the lake in anticipation of large inflows from a new storm. 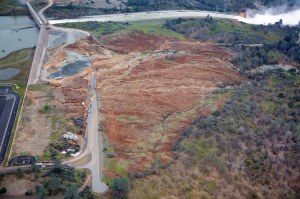 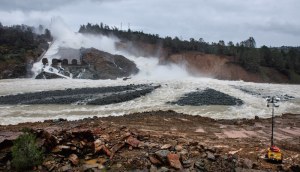 It sure seems like the surface water drought in California has been broken. The most important snow survey of the year (and often the final one) occurs on or about April 1. So I’m going to wait for that date before I do an analysis of how the wet winter has changed their water situation. Hopefully, at that point there will be enough data to allow an analysis that goes beyond the headlines and looks at long-term implications.