Home » Other » Death and Disease from the Environment

Death and Disease from the Environment

So begins the Executive Summary of Preventing Disease Through Health Environments: A Global Assessment of the Burden of Disease from Environmental Risks, a report issued by the World Health Organization (WHO). Those of us who think of the environment as the necessary support of all life on Earth may not find their claim surprising, but it is pretty dramatic: more than 1 death in every 5. Let’s look at what it means. This post will discuss some preliminaries and look at broad conceptual findings. The next post will look at specific disease burdens.

The authors looked at 133 types of diseases or injuries and found that 101 of them had significant links with the environment. They were able to quantify, at least partially, the environmental contribution for 92 of them. The 92 conditions run the gamut, including: 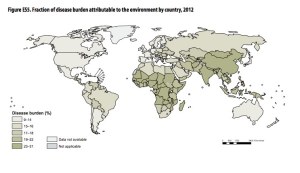 Some of these may seem controversial to an American public, seeming like personal choices. The authors contend, however, that each of them contributes to death or disease, and each of them has an identifiable link to environmental factors that are modifiable by people.

As one might expect, the fraction of deaths attributable to the environment is higher in poorer countries, lower in wealthy countries (Figure 1). There are several reasons for this. One is that wealthier nations are able to afford better environmental protections. Another is that wealthier nations have been able to transition to safer methods of doing almost everything (from transportation, to industrial processes, to cooking and home heating).

The type of disease impacted by the environment also varies by region (Figure 2). In Sub-Saharan Africa environmental factors cause a high number of per capita deaths from infectious, parasitic, neonatal, and nutritional diseases. Examples might include malaria, diarrheal diseases, and malnutrition. But in Europe, Southeast Asia, the Western Pacific, and High-Income OECD Nations, environmental factors cause high numbers of per capita deaths from non-communicable diseases. Examples might include cancer and heart disease.

The WHO report defines environmental risks broadly. Figure 3 shows what is included and what is excluded. Diseases that involve person-to-person interaction, or that result from personal habits and choices are excluded. Also excluded are disease vectors that exist in the environment, but which can’t readily be modified (for instance, pollen). Included are factors that most people would regard as environmentally modifiable (e.g. exposure to chemicals or air pollution). Thus, mesothelioma caused by asbestos exposure would be included, but getting the flu from somebody at work would not be.

Nobody keeps records of environmental exposure leading to death, especially in the undeveloped world. Thus, it has to be estimated. The report used several types of estimates which require the use of assumptions and/or expert opinion. Thus, be sure to keep in mind that the report represents an estimate. It is almost certain to contain errors, though it may be the best estimate available.

The next post will look at specific disease conditions, and what fraction of the disease burden can be attributed to environmental factors.