Home » Other » Missouri Burden of Disease

In the last two posts I looked at a report that attempted to quantify the burden of disease attributable to environmental factors. It was produced by the World Health Organization (WHO), and its analysis concerned the whole earth.

The Missouri Department of Health and Senior Services produced a report on the burden of chronic diseases in Missouri in 2013. The report makes interesting reading, though it is not equivalent to the WHO report.

Of the top 8 causes of death in Missouri during 2010, 7 were chronic diseases. (Figure 1) Together, they caused 68.2% of all deaths in Missouri. Heart disease and cancer caused by far the most, between them accounting for almost half of all deaths. 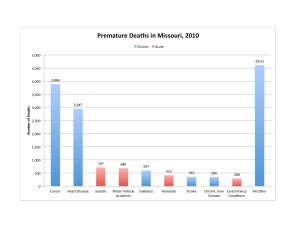 If one defines premature death as death occurring before age 65, then 14,827 Missourian’s died prematurely in 2010. As shown in Figure 2, chronic diseases caused 58.4% of the deaths, cancer and heart disease again leading the way, causing 46% of all premature deaths. 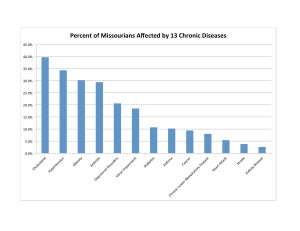 Almost 3 in 4 Missourians (74.4%) were affected by at least one of 13 major chronic conditions, as shown in Figure 3 (individuals may be affected by more than one condition, thus the percentages do not sum to 100%). More than 1/3 of Missourians were living with cholesterol and hypertension, conditions which are not fatal in themselves, but which contribute to many other diseases that are. The prevalence of each of these conditions was higher in Missouri than nationally, except for vision impairment, which occurred in Missouri about at the same rate that it does nationally.

The mortality rates for heart disease, cancer, stroke, and diabetes all declined significantly in Missouri between 2000 and 2009. Prevalence rates did not, however, and for some chronic diseases prevalence rates actually increased. Thus, it seems that Missouri has made progress managing chronic diseases, but not preventing them.

The Missouri report did not address environmental factors that cause disease. To the extent that the report did consider risk factors, it focused on demographic characteristics, personal habits, and the social environment, such as the availability of health care, the availability of healthy food, and second-hand smoke. While some of these overlap with the WHO report to a limited degree, the Missouri report did not consider ecological factors such as air pollution and exposure to toxic chemicals. Despite the fact that ecological factors contribute strongly and obviously to several of the chronic conditions from which Missourians suffer, such as cancer and chronic lower respiratory disease, I could find no report addressing the issue in Missouri. If any of you know of one, please let me know.

By mogreenstats in Other on 2017/06/08.
← Disease Burden Attributable to Environmental Factors Declining Snowpack in the American West →