World Carbon Dioxide Concentration Above 400 ppm. for the First Time Ever 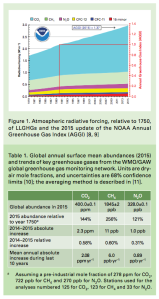 In this post I will catch up with the Greenhouse Gas Bulletin published by the World Meteorological Society in October, 2016. It concerns atmospheric GHGs during 2015.

Radiative forcing (the warming effect) of these GHGs was approximately 3.0 watts per meter in 2015 above 1750, compared to approximately 1.7 in1979. 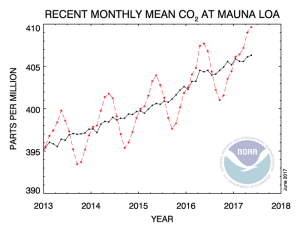 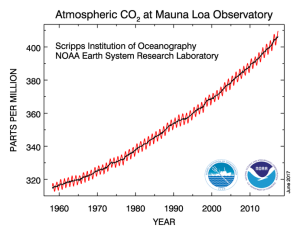 Figure 3 shows the same data going back to the late 1950s. Though the concentration of carbon dioxide surges and ebbs each year, you can see that the trend is irrevocably upward. The peak each winter is higher than the previous winter’s high, and the low point each summer is higher than the previous summer’s low. At no time has this trend ever reversed, in fact it has never even slowed. If anything, the trend is curving upward, meaning it is increasing faster.

In the next post I will discuss what these findings mean.

World Meteorological Organization. 2016. WMO Greenhouse Gas Bulletin: The State of Greenhouse Gases in the Atmosphere Based on Global Observations through 2015. Number 12, 24 October 2016. Downloaded 6/15/2017 from http://www.wmo.int/pages/prog/arep/gaw/ghg/GHGbulletin.html.