In the last post I reviewed a report from the World Meteorological Organization; it said that in 2015 the atmospheric concentration of carbon dioxide reached 400 ppm for the first time. The methane and nitric oxide concentrations were 1,845 ppb and 328 ppb. Combined, I calculated that the 3 gases had a radiative forcing equal to 543 ppm CO2e.

[Note: When first published, this post contained a typographical error: in the title and in the first paragraph, I reported the CO2e as ppb (parts per billion). Parts per million (ppm) is correct, and I have made the change.]

More recent data from the Mauna Loa Observatory indicates that, since 2015, the atmospheric concentration of carbon dioxide has climbed to 409.65, meaning that the combined radiative forcing is now even higher. But what do these numbers mean? I will try to explain.

Most scientists studying climate change have emphasized that it is already too late to avoid its effects entirely – they are already happening. My recent posts on the declining snowpack of the western United States are just one example. I’ve also published numerous posts documenting the increase in temperature in Missouri and other states, the USA as a whole, and the world as a whole. 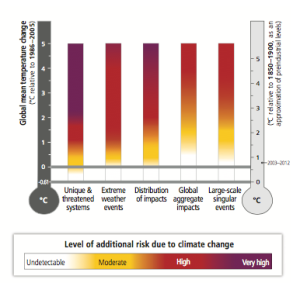 How much the temperature will actually increase depends on how high radiative forcing goes, which will depend on the atmospheric concentration of GHGs. Carbon dioxide is the principal GHG. 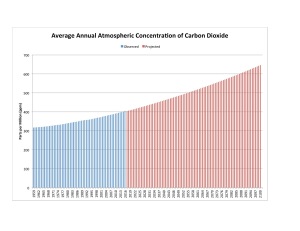 The future atmospheric concentration of GHGs depends on how much we continue to emit. To study the possibilities, scientists use a series of scenarios that range from sharply reduced emissions, through a middle ground, to very high emissions. They have changed the names they give these scenarios, and now call them RCP2.6, RCP4.5, RCP6, and RCP8.5. RCP6 is associated with a carbon dioxide concentration in 2100 that is similar to the 651 ppm projection I calculated above. Thus, if emissions continue to grow at the same rate, the earth will approximate the RCP6 scenario.

Now, as I noted in the last post, the growth in the atmospheric concentration of carbon dioxide seems to be accelerating. Thus, there is some question regarding whether the earth really is following the RCP6 scenario or something worse. For now, I will stay with RCP6. 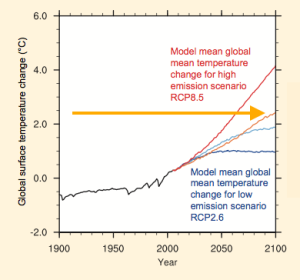 Well, if you come away thinking it is all a bit complex and vague, if not downright mealy-mouthed, I wouldn’t blame you. Climate scientists used to speak more directly, but then they came under attack from those who wanted to destroy them, and those days are gone. If you want to think further about the implications of all this, then think about these questions:

The reality we face is becoming more dire each day, dear readers. We are passing danger signs like they mean nothing. We will have to live with the consequences for a very long time.

World Meteorological Organization. 2016. WMO Greenhouse Gas Bulletin: The State of Greenhouse Gases in the Atmosphere Based on Global Observations through 2015. Number 12, 24 October 2016. Downloaded 6/15/2017 from http://www.wmo.int/pages/prog/arep/gaw/ghg/GHGbulletin.html.

By mogreenstats in Climate Change, Greenhouse Gas Emissions on 2017/07/13.
← World Carbon Dioxide Concentration Above 400 ppm. for the First Time Ever Green Buildings are Better – Health →