In the last post I reported on the National Priorities List (Superfund) sites in Missouri. Those sites tend to be the worst of the worst: the greatest threats to health and the environment. But they are just the tip of the iceberg. There are other seriously contaminated sites that don’t quite reach the same level of threat as do the NPL sites. In addition, there are also brownfield sites. These are smaller sites; though they may contain very toxic waste, and there are many more of them, each one individually represents less off a threat. Also numerous are underground storage tanks (for instance below ground gasoline tanks at a gas station) that represent environmental threats. 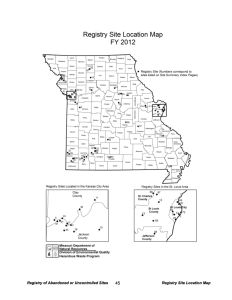 Under state law, the Missouri Department of Natural Resources (MoDNR) maintains a Registry of contaminated hazardous waste sites in the state. The list is published each January in the Missouri Registry Annual Report. This post concerns the report for FY 2016, published January, 2017. Figure 1 maps the sites in the Registry.

Inclusion in the Registry does not automatically slate the property for remediation. By law, the parties responsible for contaminating a site in the Registry or NPL are responsible for cleaning it up, under supervision of the Department and EPA. If there are no potentially responsible parties, Superfund dollars finance 90% of the work, with a 10% state contribution. Cleanup can be a long, expensive process; with tight budgets, inclusion on the Registry is no guarantee that cleanup has started or has been completed. Rather, inclusion puts the site under oversight by the MoDNR, assesses and classifies the level of threat, and provides the public (especially any potential buyers and nearby property owners) of the contamination. In some cases, the department is able to negotiate consent agreements with site owners to remediate the site in order to avoid having it listed. (MoDNR 2017b, 2017c)

The sites on Missouri’s Registry overlap with the sites on the active NPL, however each contains sites that the other does not. Figure 1 maps the sites in the Registry.

The sites on the Registry are classified according to the following classes:

One final caveat must be discussed here.  Many eligible sites are not listed due to pending or ongoing investigation. In addition, sites are listed only if they contain substances that meet strict legal requirements. Thousands of hazardous substances do not meet the criteria or are exempted, such as:

This list of exemptions is illustrative, not comprehensive. Waste from some of these sources is covered by other programs, either federal or state, but I don’t know the specifics. Thus, there may be many more large, seriously contaminated hazardous waste sites that are not included in the Registry. In a previous post I have reported the existence of the E-START mapping utility available through the DNR’s website. It may be the most comprehensive resource of contaminated waste sites in Missouri. I will refer to it again in the upcoming couple of posts.

In the next post I will discuss brownfield sites.