Missouri is home to almost 15,000 operating and former petroleum facilities. Only 15% of them are listed as having had no known releases.

Missouri is home to 13,471 currently operating or former underground storage tanks (USTs) and 1,512 “other petroleum facilities” according to a database created by the Missouri Department of Natural Resources (MoDNR). Almost all of these facilities were used for petroleum storage or delivery. An underground storage tank is any tank that has more than 10% of its volume below grade. The thing about underground storage tanks is that they are, well, underground: you can’t see what is happening down there. They could be leaking, maybe for a long time, and nobody would know. (MoDNR 2017a) Figure 1 maps the location of currently operating sites and Figure 2 maps the location of former sites. For former sites, only sites for which investigation or corrective action is incomplete, or sites issued No Further Action Letter with restrictions are shown. (MoDNR 2017b) 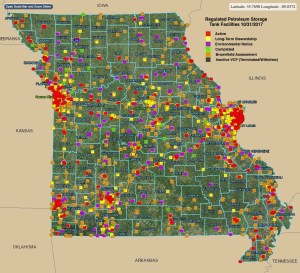 In 1985 the federal Resource Conservation and Recovery Act established a regulatory program for underground storage tanks. The Missouri law addressing USTs was passed in 1989. In 2004, the Missouri Department of Natural Resources (MoDNR) created a risk-based program for use by persons responsible for addressing petroleum releases at petroleum storage tank sites. Since passage of the law, all USTs storing petroleum must be built and operated to certain standards, must register with the state, and must and install certain equipment to monitor the integrity of the tank and detect a leak should one occur. Should a leak occur, tank owners are required to notify the state, and they are required to clean up the leak. When they no longer want to use the tank, they are required either to remove it and remediate the site where the tank was located, or they are required to clean the tank on-site, fill it with an inert substance (like concrete), and permanently cap it. (MoDNR 2013, 2017c)

Certain types of USTs are exempt from the program:

Figure 3 shows the data regarding the USTs. The first column represents USTs that are currently operating. The second column represents USTs that have closed, having been removed or closed on-site. The third column represents sites that are not tanks but are related petroleum storage sites. Combined, there are 14,983 sites spread across the state. The colors of the columns code the status of the sites. Administrative closure means that the file on that site was closed for one of a variety of reasons, including that it was being remediated in a different hazardous waste program (e.g. Brownfield or Superfund). From this database, there is no way to know the status of those sites, but they represent a small fraction of the total.

Currently operating USTs represent about 22% of the sites in the database. Fifty-nine percent of them have experienced no known releases, while 14% received a No Further Action Letter prior to 2004, 14% received one with restrictions after 2004, and 9% of them are currently undergoing assessment and/or correction.

Former USTs represent 68% of all the sites in the database. About 80% of them received a No Further Action Letter prior to 2004, when the Risk-Based Corrective Action Process was established. I don’t know how many represent sites where no release ever occurred, or ones where a release did occur, but it was remediated according to state standards. Only 9 percent of them were issued a letter with restrictions, and only 4% of them are currently undergoing assessment or corrective action.

It seems to me unlikely that, of the sites issued a No Further Action Letter prior to 2004, not one experienced a release. If only 59% of currently operating USTs have had no known release, then it means that 41% have had one. If one applies that number to the former USTs issued a letter prior to 2004, then it would represent some 3,305 sites.

Other facilities represent about 10% of the total. About 47% of them received a No Further Action Letter prior to 2004, and as with former USTs, one cannot know if this means they never leaked, or if they did leak but were remediated to state standards. Seven percent of them were issued letters with restrictions, and another 9% are currently undergoing assessment/remediation.

Underground Storage Tanks represent by far the largest collection of potentially contaminated sites in Missouri, and by far the most widespread. The maps above hardly do justice to the numbers, as the symbols overlap and cover each other up. The conclusion seems to be that, though the majority of USTs currently in operation don’t leak, a significant fraction of them do. How big a fraction? I don’t really know, but based on currently operating USTs, it could be 41% or higher. The database does include information about the nature of the releases and the substances involved, though it can’t be summarized in a brief article such as this.

I will wrap up this series on hazardous waste sites in Missouri in the next post with a summary and some thoughts.

By mogreenstats in Land, Pollution - Land on 2017/11/23.
← Brownfield Sites Hazardous Waste in Missouri – A Summary →