This post will focus on a few articles published recently that highlight effects that climate change is already having around the world. Though the phenomena studied in them occurred far away, they will have important consequences for us here in the USA, and even in Missouri.

Human migration into Europe has become a large political and humanitarian problem. European countries have been struggling to provide the basic services that the migrants need, and to find ways to integrate them into society. The problem of immigration has been one of the forces leading to Brexit, and to the upsurge in right-wing populism around the world (including here in America). 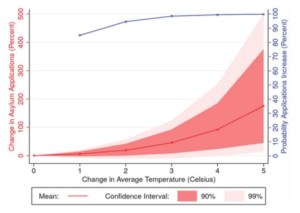 The study didn’t include migration into the USA from countries south of our border, but I suspect that the basic findings would apply here, as well. In fact, I already reported (here) that in 2014 the CNA Military Advisory Board concluded that climate change would become one of the most significant threats to national security faced by our nation. Climate change would lead to increased migration around the world, which would lead to political instability, which would cause conflicts to break out. Given the difficulty that Europe is having coping with the current problem, and that the problem could nearly triple in size by the end of the century, the Military Advisory Board’s conclusion doesn’t seem too far off. (May, 2014)

The Shrimp Are Gone From Maine

Northern Shrimp are a species of shrimp that require cold water in order to spawn. Maine has been the southern limit of their historical habitat, and they have represented a small but valuable fishery for New England states. Since 2012, the total biomass of shrimp estimated by the Gulf of Maine Summer Shrimp Survey have been the lowest on record. (Figure 2) Managers have closed the waters to shrimp fishing from 2014-2018 in an attempt to prevent shrimp from being completely eliminated from Maine waters. (Atlantic States Marine Fisheries Commission, 2017)

The primary cause of the decline is climate change. Ocean temperatures in the Gulf of Main have increased at a rate of about 0.5°F per year – that is incredibly fast, almost 8 times faster than the global rate. Figure 3 shows the data. The blue lines show the 15-day average water temperature anomaly in the Gulf of Maine from 1980 to 2015. The black dots show the average annual temperature anomaly, and the dashed line shows the trend over the whole time period. The red line shows the trend for the decade from 2005 to 2015.

It is easy to see that the ocean has been warming. The shrimp don’t spawn well in the warmer water, so they are dying out. (Evans-Brown, 2014)

The warmer temperatures have affected more than shrimp. As temperature has increased, cod have also declined, to the point that they are now commercially extinct in the New England fishery. With the cod, a failure to recognize the effect of global warming caused fishery regulators to keep the permitted catch at a high level that could not be sustained, and they were basically fished out out existence. The moratorium on shrimp fishing is an attempt to prevent a similar occurrence. (Pershing et al 2015)

Fishing, especially off New England, was the first colonial industry when Europeans came to America. Over the past century, several species have collapsed and no longer support viable commercial fishing: Atlantic halibut, ocean perch, haddock, and yellowtail flounder. These once fed millions of Americans. No more. Even the venerable Atlantic cod, once so numerous that it was said you could walk from America to England stepping on their backs, are commercially extinct. We are killing the oceans. More below. (NOAA Fisheries Service, 2017)

To live, coral requires a symbiotic relationship with certain species of algae. Coral bleaching occurs when stressful conditions cause the algae to be expelled from the coral, which then turns white. If algae don’t reenter the coral quickly enough, the coral will starve to death.

The main culprit is global warming. Coral survives only in a relatively narrow temperature band, and if the water temperature rises too high, bleaching occurs. Temperatures have, indeed, risen. As noted above in the section on the Gulf of Maine, in some places they have increased incredibly quickly.

These phenomena, though occurring far away, are all signs that the basic systems that support life on this planet as we know it are in danger. If we think that they could not collapse, we are seriously kidding ourselves. They may be collapsing already. If we dream that we will somehow escape being affected, we need to wake up.

By mogreenstats in Climate Change, Other Climate Change on 2018/03/01.
← Above Average Precipitation in 2017 for Contiguous USA Missouri Species of Concern 2018 →