Home » Population » Birth Rates Have Declined, the Number of Births Has Not

Birth Rates Have Declined, the Number of Births Has Not

The National Center for Health Statistics keeps data for each year going back to 1909 on the number of live births in the United States and on the fertility rate. Fertility rate is defined as the number of births per 1,000 women. These data are an important environmental concern because they greatly influence future population. The more people there are in the world, and the higher their standard of living, the more environmental stress is created. The United States has a high standard of living, so an increasing population here increases environmental strain. 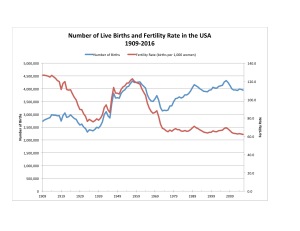 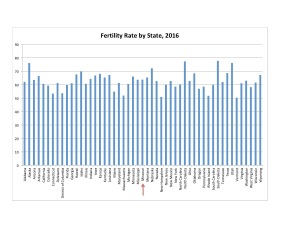 Figure 3 shows the 2016 fertility rate for the 50 states plus the District of Columbia. South Dakota had the highest fertility rate, at 77.7, and Vermont had the lowest, at 50.3. Missouri was 19th highest. I don’t think that anybody believes that state boundaries control fertility rate, but these data give a small snapshot of what is happening in our state compared to others.

By mogreenstats in Population on 2018/04/12.
← Below Average Snowpack in the American West Second Lowest Arctic Sea Ice on Record →