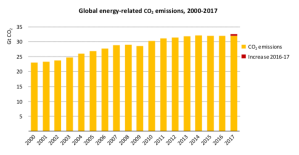 More than 40% of the increase in energy consumption was driven by China and India. (See Figure 2) The result was an almost 150 million metric ton increase in China’s carbon dioxide emissions from energy. India’s emissions are not broken out, but carbon dioxide emissions from the rest of developing Asia (ex-China) were approximately 125 million metric tons higher than in 2016 (amounts are not precise because they are read from a graph).

Some countries had lower carbon dioxide emissions. The biggest decline came from the USA, where emissions declined 25 million metric tons, or 0.5%. In Mexico, emissions dropped 4%, and in the United Kingdom they dropped 3.8%. Way to go Mexico and United Kingdom! Because those countries consume far less energy than does the USA, the raw number of metric tons reduced was less than in the USA, despite the percentage being higher.

Last December I published a post reporting that worldwide carbon dioxide emissions from energy had held constant for the three years ending in 2016. What happened? 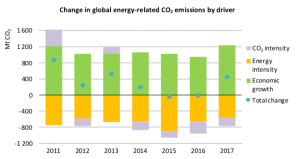 Figure 3 shows the drivers of the change in carbon dioxide emissions. Energy intensity (in yellow) has decreased every year since 2011, meaning that it required less energy to produce a unit of economic output. The rate at which energy intensity improved seemed to grow until 2015, but the rate of improvement seems to have slowed since then. Carbon dioxide intensity also seems to have improved in many of the years (meaning that less carbon dioxide is released per unit of energy produced, most likely from cleaner fuel). On the other hand, economic growth has occurred in every year. It accelerated in 2017, and its effect overwhelmed the effects of the other two drivers. 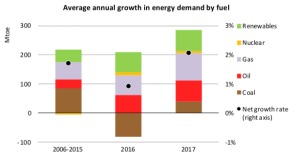 Figure 4 shows the annual growth in energy consumption by fuel. The chart shows that from 2006-2015, there was an average increase in consumption of all types of energy except nuclear. In 2016, however, there was a significant reduction in demand for energy from burning coal. Readers of this blog know that represents an important achievement, as coal emits more carbon dioxide per unit of energy than do the other fuels. However, in 2017, that achievement reversed itself, and demand for energy from burning coal rose again.

Overall, the report is not good news. As readers of this blog know, to prevent the worst effects of climate change, greenhouse gas emissions need to peak, and then be significantly reduced. There is no sign that is occurring. To quote the report:

The IEA’s Sustainable Development Scenario charts a path towards meeting long-term climate goals. Under this scenario, global emissions need to peak soon and decline steeply to 2020; this decline will now need to be even greater given the increase in emissions in 2017. The share of low-carbon energy sources must increase by 1.1 percentage points every year, more than five-times the growth registered in 2017. In the power sector, specifically, generation from renewable sources must increase by an average 700 TWh annually in that scenario, an 80% increase compared to the 380 TWh increase registered in 2017. (International Energy Agency, 2018, p. 4)

By mogreenstats in Climate Change, Greenhouse Gas Emissions on 2018/05/03.
← More Developed Land Nationally and in Missouri The Grid – Update 2018 →