Drought in American West and Southwest

Drought has one again gripped the American West and Southwest. Unfortunately, the wet winter of 2017 turned out to be a one-year reprieve. Perhaps the coming winter will be wet again, but for now, the regions are once again dry – in some cases, as dry as they have ever been since record-keeping began. 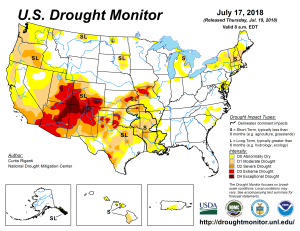 Figure 1 shows the U.S. Drought Monitor for July 17, 2018. This map shows the Palmer Drought Severity Index for the United States. White areas are not in drought, colored areas are, and the darker the color, the worse the drought. It is easy to see that an “exceptional drought” has gripped portions of the Southwest, centered on the Four Corners Area where Colorado, New Mexico, Arizona, and Utah meet. Though the drought is most severe there, it has gripped much of the entire western United States.

Drought is primarily about soil moisture. Without moisture in the soil, crops wither and drinking water sources dry up. It is not feasible, however, to directly measure soil moisture across the entire country. The Palmer Drought Severity Index computes an estimate of soil moisture using temperature and precipitation data, and is the primary measure of drought used by the National Oceanographic and Atmospheric Administration. 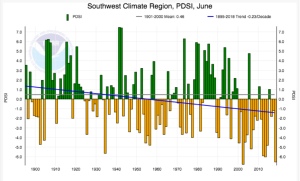 Figure 2 shows the PDSI in June for the Southwest Climate Region (Arizona, Colorado, New Mexico, and Utah) from 1895 to 2018. Green columns represent years when it was wetter than average in June, orange columns when it was dryer than average. It is easy to see that green columns cluster to the left of the chart, and orange ones cluster to the right. In fact, of the most recent 19 years, 16 have been drier than average. This year, June was the second driest in the record, virtually as dry as it has ever been since record keeping began. The blue line shows the trend: the PDSI has decreased -0.23 per decade on average.

Ever since I wrote an extended series of posts on drought in California in 2015, this blog has followed the drought situation there. Plentiful snow during the winter of 2017 brought welcome relief, but the winter of 2018 was a big disappointment. Precipitation was below average, and the snowpack peaked well below normal (see here).

As Figure 3 shows, California has not escaped the drought gripping most of the West. The most extreme drought is in the southeastern corner of the state. That is where the Imperial Valley is located, a region that supplies us with many of our fruits and vegetables. The farms there are mostly irrigated with water from the Colorado River, so local drought there is not a terrible worry for us here in Missouri. More on the Colorado River below, however.

Figure 4 shows that the PDSI for the state as a whole for June 2018, indicates a severe drought, but not an extreme one. The trend over time is clearly downward, however, and the continued dryness represents a long-term threat to the state’s water supply.

As Figure 5 shows, California’s reservoirs are moving into deficit. They have been fuller than average for most of the time since the winter of 2017, but now three of the biggest and most important, Trinity Lake, Lake Shasta, and Lake Oroville, are below average for this date. In the chart, the yellow bars represent the maximum capacity of each reservoir, the blue bars the current level, and the red line the average for this date. Lake Oroville has not yet fully recovered from the near disaster in 2017 that caused managers to lower the lake level to prevent a collapse of the dam(see here).

Readers who have been following this blog know that California, Arizona, Nevada, Utah, New Mexico, and even Mexico depend on water from the Colorado River, and that Lake Mead is the large reservoir that holds the water for all of those states. You also know that water withdrawals from Lake Mead have exceeded inputs for many years, and the level of water in the lake has been relentlessly dropping. One study went so far as to predict that Lake Mead had a 50% chance of going dry by 2021. (Barnett and Pierce, 2008. See here for a fuller discussion California’s water resources.) Figure 6 shows the level of the lake for the past 3 years. The green line shows 2016, the red line 2017, and the blue line the year-to-date in 2018. Notice that the chart begins October 1, which is the official start of the water year. The wet winter of 2017 replenished the lake a little bit, but you can see that the current drought is causing it to drop again. Lake Mead is only 38% full, and Lake Powell, the large reservoir upstream from Lake Mead, is only 51% full. These low levels do not represent an immediate existential threat, but if dry conditions persist, they will before too many years pass.

The situation is different for Missouri. The most important source of water in our state is the Missouri Rivers (see here). Going back to Figure 1 above, you can see that drought is not severely impacting most of the region drained by the Missouri. As Figure 7 shows, precipitation in the Northern Rockies and Plains Climate Region was slightly above average for the first 6 months of 2018. Statistics for the reservoirs along the Missouri show that they are at or near maximum storage. In fact, since part of their mission is flood control, several of them are higher than desired for that purpose. (U.S. Army Corps of Engineers, 2018)

The real concern is that the drought in the American West might not be not a temporary weather phenomenon, but, instead, a permanent change in climate. Modelers predict that climate change will cause just such a change, could it be occurring already?

By mogreenstats in Climate Change, Weather Patterns on 2018/08/02.
← The First Half of 2018 Was Hot, but Not Record-Breaking Drought in American Southwest (Revised) →