Recent weeks have been very active for tropical storms. At one time in the Atlantic, there were 3 hurricanes (Florence, Helene, and Isaac) and 2 tropical storms (Gordon and Joyce). In the Eastern Pacific, August saw 4 tropical cyclones active at the same time (Hector, Kristy, John, and Lleana). and in September, Hurricane Hector and a new storm, Hurricane Olivia, impacted Hawaii. In the Western Pacific there have been 28 named storms. One of them, Super-Typhoon Mangkhut, caused extensive damage in the Philippenes.

Is this normal, or are tropical storms getting worse?

Tropical cyclones are classified by the speed of their winds:

Hurricanes are further classified according to the Saffir-Simpson Hurricane Wind Scale:

Tropical cyclones generally originate near the equator. Figure 1 shows the major regions where tropical cyclones tend to form, and their typical paths. I’m not sure what sends so many of them up the U.S. coast, rather than coming ashore. Perhaps it is the jet stream, or the Gulf Current, or the Mid-Atlantic High. 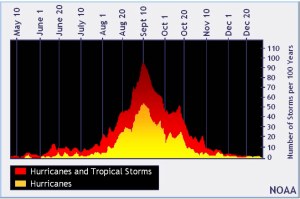 Figure 2 divides the year into 10-day intervals, and counts the number of tropical storms, hurricanes, and major hurricanes that form in the Atlantic Basin per 100 years during each interval. August and September are “hurricane season,” and the 10 days from September 10-19 are the peak. This chart would seem to indicate that during that interval, between 90 and 100 tropical storms originate every 100 years in the Atlantic Basin. That averages out to about 0.9-1.0 per year. Thus, it would appear that the last several weeks have been unusually active. 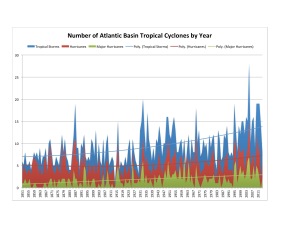 First, the variation between years is large for all of the series. Second, there are more tropical storms than hurricanes, and more hurricanes than major hurricanes. Third, all three series show an increasing trend over time. There are more tropical storms than there used to be, more hurricanes, and more major hurricanes. HOWEVER, in viewing these trends, one must keep in mind that today we have weather satellites, air travel, and a good deal more shipping density across the Atlantic Ocean. It is quite possible that some storms went undetected or unmeasured in the past, but that is no longer the case. Thus, the observed change could easily be due to better observations, not a real increase in the number of storms. I don’t have the ability to make that correction, but The Fifth Assessment Report of the Intergovernmental Panel on Climate Change concluded that evidence for an increase in the number of tropical cyclones is not robust.

As noted above, tropical cyclones can form in 8 basins around the world. One might ask which produces the most severe storms? Figure 4 shows the data. All of the basins have produced storms with sustained winds above 150, but the highest ever recorded was 215 mph. in Hurricane Patricia in the Eastern Pacific in 2015. In terms of lowest central pressure, the lowest ever recorded was in Typhoon Tip in the Western Pacific in 1979.

One might also ask which basin produces the most severe storms. Record keeping began in a different year in each basin, however, there appears to be a clear answer: the Western Pacific. Counting only storms with a minimum central pressure below 970 kPa, this basin has produced more than twice as many as any other basin.

Large cyclonic storms most often form in the tropics during hurricane season, but they don’t have to. For instance, the so-called “Perfect Storm” (they made a movie about it starring George Clooney) was a 1991 storm that formed in the Atlantic off the coast of Canada on October 29. It developed into a Category 1 hurricane, with a well defined eye, not dissipating until after November 2. Similarly, the remnants of Tropical Storm Rina (2017) travelled north across the Atlantic, crossed the British Isles, and crossed Central Europe. Entering the Mediterranean Sea, it re-strengthened into a tropical storm, now called Numa, which developed an eye and other characteristics typical of a hurricane. It’s strength peaked on November 18, with maximum sustained winds of 63 mph., not quite hurricane strength, but close.

Wikipedia contributors. (2018, September 14). List of the most intense tropical cyclones. In Wikipedia, The Free Encyclopedia. Retrieved 22:23, September 18, 2018, from https://en.wikipedia.org/w/index.php?title=List_of_the_most_intense_tropical_cyclones&oldid=859553932.