The last time I looked, I looked at data through 2016. This post updates the data through 2018. The U.S. Geological Survey database is not categorized by state, so I have been following earthquakes of magnitude 2.0 or greater in a rectangle that approximates Missouri. The precise boundaries are given in the Sources list. 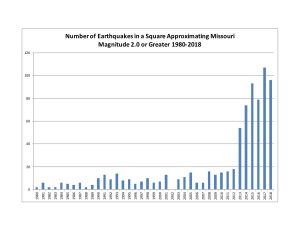 The vast majority of these earthquakes are small. In 2017-18, 12 of the earthquakes were magnitude 3.0 or larger, with the largest topping out at 3.64.

According to the Missouri Department of Natural Resources, the famous New Madrid Earthquake was actually a series of 3-5 major quakes of magnitude 7.0 or larger, and many several thousand smaller ones. Major earthquakes are also believed to have occurred in southeastern Missouri in the years 300, 900, and 1400 C.E.

Figure 2 is a map showing the location of the earthquakes counted above in 2017-2018. It is easy to see that they cluster along the New Madrid Fault in southeast Missouri. The second largest group extends across northern Arkansas.

I don’t know why Missouri is experiencing this increase in small earthquakes. The swarm of earthquakes in Oklahoma has been attributed to the deep well injection of wastewater from fracking, but there is virtually no fracking in Missouri, and Missouri has no deep well waste injection sites. There are fracking operations in Arkansas, but they run through the center of the state from Conway west to Oklahoma. They are not particularly close to the New Madrid area.