The previous post discussed the EPA’s Toxics Release Inventory. In this post, I will update toxic waste data for Missouri for 2017, the most recent year for which data is available. 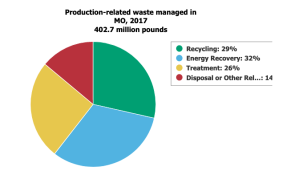 Toxics can be managed by (from most desirable to least) reducing their creation at the source, by recycling, by energy recovery, by treatment, or by disposing and/or releasing them. The Figure 1 shows Missouri managed toxic wastes in 2017. The largest amount was used to create energy (often this involves burning in a boiler). The next largest amount was recycled for reuse. 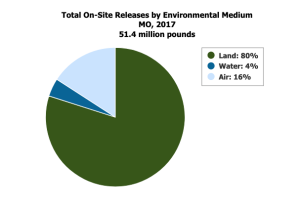 Toxic releases can occur either onsite at the industrial facility that uses them, or offsite at some toxic materials treatment and storage facility. Materials can be released into the air, they can be discharged into surface water, and they can be dumped on the land. Figure 2 shows Missouri toxic releases by release category in 2017. By far the largest percentage, 80%, is dumped on the land. 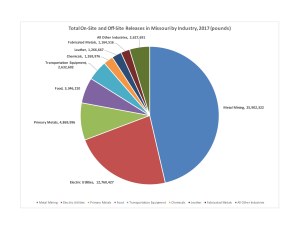 The industries responsible for releasing the largest amounts of toxic chemicals are shown in Figure 3. Metal mining was the largest, accounting for almost half of all toxic releases, and electric utilities are second. Releases from the food industry continue to be larger than those from the petroleum, chemicals or plastics & rubber industries, and it continues to blow my mind! The 5 facilities that released the most toxic chemicals in 2017 were the Buick Mine/Mill, the Brushy Creek Mine/Mill, the Fletcher Mine/Mill, the Buick Resource Recycling Facility, and the Sweetwater Mine/Mill.

The chemicals that are most released in Missouri are shown in Figure 4. Compounds of lead zinc, barium and copper are the most released. The majority of these releases are probably associated with the metal mining industry, and are released on the land. The top 5 chemicals released to air and water are shown in Figure 5. Hydrogen flouride comes mostly from coal burning power plants, while nitrate compounds come mostly from the food industry (think waste from animal feeding operations). 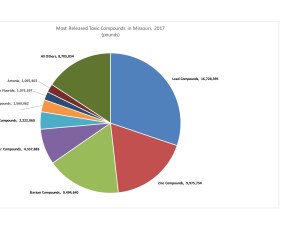 Chemicals that are persistent, bioaccumulative, and toxic (PBT) are of most concern to the EPA. These are chemicals that remain in the environment and in the body. They build up over time, meaning that repeated small releases can lead to big trouble. Lead accounts for more than 99% of PBT releases in Missouri.

In the next post I will look at some toxic release trends over time.

Environmental Protection Agency. 2019. TRI Explorer. This is a data portal that allows you to retrieve data regarding toxic releases by state, county, and municipality. It contains information by chemical, by releasing facility, by geography, and by industry. It also allows you to retrieve the data in a time series over several years. Viewed online 3/13/2019 at https://iaspub.epa.gov/triexplorer/tri_release.chemical.