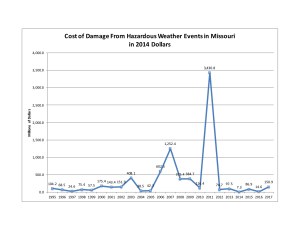 Damage from severe weather in Missouri shows a different pattern than does damage nationwide. As Figure 1 shows, the cost of damage from hazardous weather events in Missouri spiked in 2007, then spiked even higher in 2011. Since then, it has returned to a comparatively low level. The bulk of the damage in 2011 was from 2 tornado outbreaks. One hit the St. Louis area, damaging Lambert Field. The second devastated Joplin, killing 158, injuring 1,150, and causing damage estimated at $2.8 billion. The damages in 2007 came primarily from two winter storms, one early in the year, one late. In both cases, hundreds of thousands were without power, and traffic accidents spiked. 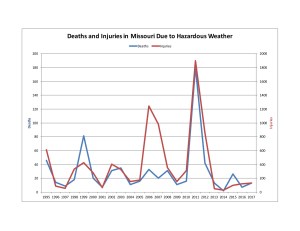 Figure 2 shows deaths and injuries in Missouri from hazardous weather. Deaths are in blue and should be read on the left vertical axis. Injuries are in red and should be read on the right vertical axis. The large number of injuries and deaths in 2011 were primarily from the Joplin tornado. In 2006 and 2007, injuries spiked, but fatalities did not. The injuries mostly represented non-fatal auto accidents from winter ice storms. The fatalities in 1999 resulted from a tornado outbreak.

2017 was a year in which Missouri saw no weather disasters that caused such high damages, or killed or injured so many people. That does not mean that Missouri was unaffected, however. The state was included in several billion-dollar weather disasters, the most costly of which was probably the flood of April 25-May 7. That was a historic flood for many of the communities that were affected.

While the national data shows a clear trend towards more big weather disasters, Missouri’s data does not. The Missouri data seems to reflect the kind of disaster and where it occurred. Tornadoes, if they hit developed areas, cause injuries, deaths, and lots of damage. Floods cause fewer injuries and deaths; damage can be significant, but it is limited to the floodplain of the river that flooded. Ice storms affect widespread areas; damages come mostly through loss of the electrical grid, which can cause widespread economic loss and from car crashes, which cause many injuries but fewer deaths.

By mogreenstats in Climate Change, Weather Patterns on 2019/04/18.
← Natural Disasters Down in USA in 2018 Missouri Has A Big, Unused Wind Resource →