This week I’m sharing with you some land use-land cover (LULC) maps. LULC maps show what is on a given area of land: water, developed cities, forests, pastures, crops, etc. I’ve been looking for recent LULC maps of Missouri for some time, and only just now found them at the website of the Multi-Resolution Land Characteristics Consortium (MRLC). This is a cooperative project by several branches of the federal government. Modern LULC maps are created by sophisticated imaging systems on satellites. This process allows for new maps to be created every few years, and the source I found has maps for 2001, 2003, 2006, 2008, 2011, 2013, and 2016.

LULC data is used for scientific study and for planning. For the purposes of this blog, what would be most interesting would be data regarding how much land in Missouri has changed use, and whether the changes represent a degradation of environmental carrying capacity. It appears to me that such data is available, either at MRLC or at the U.S. Geological Survey, but that it requires special programs and knowledge to utilize, which I don’t have. The closest I can come is a map provided by MRLC that shows the Land Use Change Index (land that changed use at least once between 2001, 2003, 2006, 2008, 2011, 2013, and 2016). 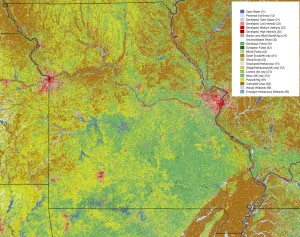 Figure 1 shows the 2016 LULC map for Missouri and a little bit of neighboring states. Each pixel on the map is 30 x 30 meters, which is close to 100 by 100 feet. Each pixel is coded with a color representing 1 of 21 categories of land use, shown in the legend. The pinks and reds jump out visually; these represent developed land. It is easy to make out the St. Louis, Kansas City, Springfield, Joplin, St. Joseph, Columbia, and Jefferson City areas, as well as other, smaller developed areas. The brown areas represent cultivated crops. The Bootheel is very heavily cultivated, but so is much of northern Missouri, especially the northwestern part. Green stands for forests – dark green for conifer forest and light green for mixed forest. There is a lot of forest in the Ozarks, mostly mixed forest. Yellow stands for pastureland/hay, which is widely distributed throughout the state. Blue stands for water bodies.

Looking at the map and forming overall impressions, I was first struck by how fragmented land use is. Land use varies by small plots in many areas of the state. Second, I was struck by how the forest land in the state is concentrated in the Ozarks. There are small forested regions in the north, but no very large tracts like in the south. Similarly, I was struck by how cultivated crops are almost completely absent from the Ozarks. There may be some farming there, but it looks to be devoted to hay and pasture. 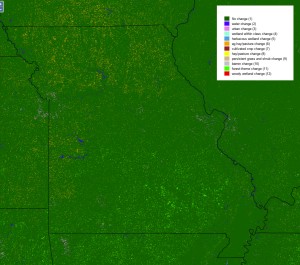 Figure 2 shows a map of the Land Use Change Index in the same area. The resolution of this map is the same, each pixel is 30 x 30 meters. The map codes each pixel according to whether the use changed at least once between the mappings in 2001, 2003, 2006, 2008, 2011, 2013, and 2016. The change could have occurred in either direction. For instance, blue codes water change: what was a body of water became something else, or something else became a body of water. There are orange dots across the top of Missouri: either land became hay/pasture, or hay/pasture became something else. In addition, the change doesn’t have to have been permanent; what was hay/pasture in 2003 could have become cultivated cropland in 2006, but then reverted back in 2008. The map doesn’t tell us, it only tells us that at some point the land changed.

It’s not clear to me why they would construct this index this way. Perhaps these changes are reversible only in theory. For instance, the pink dots represent land that has either either urbanized or “un-urbanized.” I think that in real life, it is nearly impossible for land to “un-urbanize” – streets and buildings don’t go away in a matter of a couple of years. But it would be much more useful to know which changes were permanent, and which represented a degradation of the land.

Dark green represents land that did not change use across the 12-year time period. Most of the state is dark green. However, it is surprising how much land has changed. There are a lot of orange dots across northern and western Missouri, indicating that a lot of land there either became or stopped being hay fields/pastureland. Across southern Missouri, there are a lot of light green dots, indicating lots of change in the forests there.

Pink dots are scattered around the St. Louis, Kansas City, and Columbia regions, indicating land that (probably) urbanized. Given all of the development that has occurred in Springfield and Branson, I’m surprised that there isn’t more pink in that region.

Figure 3 shows the Land Use Change Index for the eastern Continental United States (CONUS). What immediately stands out is the forestland change across the Southeast, the Far North, and Maine. The map shows that change is happening, but not what kind of change. Figure 3 also suggests that, while land use is changing more in Missouri than in some states, it is changing less than in others. 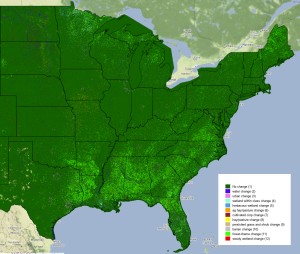 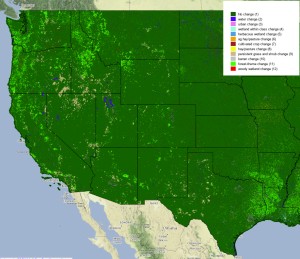 Figure 4 shows the Land Use Change Index for the western CONUS. Across the West, forest change seems to be the most common change, followed by persistent grass and shrub change. One wonders how much of this is due to logging and/or development. However, one also wonders how much of this is due to either the bark beetle infestations that have been killing trees all over the West, or to the huge wildfires that have been ravaging these areas? For instance, using the interactive map on the MLRC website, I can zoom in and identify forest changes inside Glacier National Park. Those are not logging changes, they have to be the result of wildfire. However, there have not been hundreds of wildfires all up and down the Cascade Mountains in Oregon, those are likely to be logging changes.

Maps like these are created using large databases; each pixel is identified and has data coded for it. Theoretically, one should be able to use the database to construct summary statistics. I found a couple of databases, but unfortunately, they required specialized software to use, and/or they were multiple terabytes in size. Further, the agencies that create these maps don’t seem to think that states make useful boundaries. I will continue to keep my eyes open, however, and if I should come across summary data, I will do a future post on it.