Home » Climate Change » Is It Cloudier Than It Used to Be?

Is It Cloudier Than It Used to Be?

I have had the general impression that in recent years, it has gotten cloudier. But that could be an incorrect impression, coming from the fact that, like everybody, I get older with each year. Or, it could come from the fact that my analyses for this blog have shown that there is marginally more precipitation in Missouri due to climate change. Perhaps I say “Ha!” to myself every time it is cloudy, “See, it’s because of climate change.”

Checking out one’s subjective impressions about clouds is not so easy. Clouds are very complex, and they provide the largest source of uncertainty in future climate projections. There are all kinds of clouds, and they exist at many levels of the atmosphere. Not only that, they are constantly changing: it can be overcast one moment and clear an hour later. The task of reducing this complexity to a simple measure of cloud cover has been difficult. Most weather stations do it, however. For instance, the daily climate report published by National Weather Service in St. Louis reports that for St. Louis, on July 21, 2019, the sky cover was 0.6. This means that on average for the whole day, 6/10ths (60%) of the sky was covered with clouds. (They measure the percent of the sky covered by clouds several times a day, and average the results.)

Finding a time series reporting this data over time is harder. I’ve been looking for it for some time, and I finally found it at NASA’s Giovanni Data Tool. This is a portal that provides access to satellite data for a large number of atmospheric variables, including cloud fraction. Without getting into the weeds, cloud fraction is the fraction of an area that is cloudy, roughly the same thing as sky cover, but from the sky down, rather than the ground up. The scale runs from 0, meaning none of the area was covered by clouds, to 1, which means all of the area was covered by clouds. Thus, as in the example above, 0.6 would mean that 6/10ths of the area (60%) was covered by clouds.

Giovanni did not permit searching for cloud fraction by state, but it would search within a rectangle that I could define. So, as I usually do in such cases, I defined a rectangle that just barely enclosed the whole state. Figure 1 shows the search area.

Figure 2 shows the monthly cloud fraction for that rectangle from 1/1/1980, through 6/1/2019. To justify my impression that it is cloudier, you can notice that from about 2010, there has been a noticeable increase in cloud fraction. However, it is an anomaly, and the trend line, in black, shows that the cloudiness has not changed much since 1980; if anything, it has decreased a little bit, the trend line being down about 0.02 over the whole time period.

Thus, my impression was both right and wrong. I was right that, since 2010, it has gotten more cloudy over Missouri. But that hides the long-term fact that, since 1980, it has not. It is common for subjective impressions to favor recent experience over the far past, but it can hide the truth. 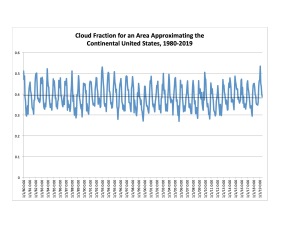 What about the Continental United States (CONUS) as a whole? Again, Giovanni wouldn’t let me search by the boundaries of the CONUS, so I searched in a rectangle that barely enclosed it. Figure 3 shows the data. Notice first that the year-to-year variation is less than for Missouri. Where cloud fraction in Missouri has bounced around between 0.2 and 0.6, cloud fraction for the CONUS has bounced around between 0.3 and 0.5. We have seen this before with other environmental data: large areas tend to average out variations in one area with opposite variations in another. However, here, too, we see the slightly declining trend in cloud fraction. The CONUS as a whole is becoming slightly less cloudy, and the difference in the trend line is about 0.02, similar to what it was for Missouri.

The world, however, shows a markedly different trend (Figure 4). Again, because it is an even larger area, the year-to-year variation is now only between 0.44 and 0.5. Don’t be fooled because Excel has spread out the y-axis. However, this time the trend is slightly up, the trend line increasing slightly less than 0.02. The world is becoming very slightly more cloudy. I don’t know for sure, but I would bet you that the increase is happening primarily over the oceans. That would be an interesting research project.

The changes are very small. However, the world has become slightly cloudier over the last 40 years, while both Missouri and the Continental United States have become slightly less cloudy.

“Analyses and visualizations used in this article were produced with the Giovanni online data system, developed and maintained by the NASA GES DISC.” Data downloaded 7/22/2019 from https://giovanni.gsfc.nasa.gov/giovanni.

By mogreenstats in Climate Change, Weather Patterns on 2019/08/01.
← Hurricane Barry, Tropical Cyclones, and Climate Change The Heat Is On, the Fires Are Burning →