The amount of dangerous highwall in Missouri spiked in 2017, leading to a large increase in uncompleted high priority abandoned mine units needing reclamation.

The previous post concerned the total inventory of abandoned mine lands in Missouri. This post focuses on high priority abandoned mine lands: those that pose a threat to public health and safety (Priority 2), and those that pose an extreme danger to public health and safety (Priority 1). The law requires Missouri to reclaim high priority lands before low priority lands.

Reviewing the categories of hazards (not shown), most categories increased modestly between 2015 and 2017. However, units of dangerous highwall increased from 11,350 to 160,924. There are several possible reasons for such a drastic change. I cut and paste my data from the frederal database, and I have made several checks with the e-AMLIS database to ensure I did not make an error, and I don’t think I did. There may have been a change in the way units of highwall are counted that is not described in the database information, or Missouri could have inspected mine lands that had not been previously inspected, resulting in the discovery of additional dangerous highwall, or known highwall that was not dangerous may have become dangerous during the period.

Completed costs have also grown at each date, indicating the reclamation work that has been completed. Uncompleted costs, however, have grown even more quickly, from $14 million in 2014 $109 million in 2019 – they are almost 8 times what they were in 2014. I’m sure the change partially results from better estimates of what the costs will actually be, combined with inflation. Whether those factors account for the total change, I don’t know. 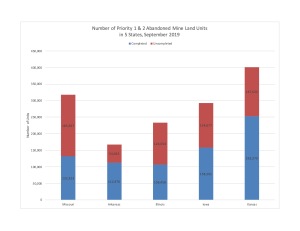 Figure 1 shows the number of Priority 1 and 2 units for Missouri and 4 neighboring states. Blue represents completed, and red represents uncompleted. Don’t forget that a unit can be acres of spoiled land, individual buildings or structures, hazardous bodies of water, vertical openings, or lengths of dangerous highwall, so one cannot directly translate number of units to environmental threat or cost to reclaim.

Figure 2 shows the estimated costs to reclaim Priority 1 and 2 sites for those same states. Blue represents completed work, red represents uncompleted. Because funding appears to be the most important factor limiting reclamation efforts, this chart may be a more informative representation of the amount of work accomplished so far, and the amount yet to do. It shows that in terms of costs, Missouri has completed a little bit more than 1/3 of the work required to reclaim its high priority sites. Arkansas has completed about 2/3, Illinois a bit more than 1/2, and Iowa not quite 1/2. Kansas, on the other hand, has completed about 6% of the work. They are just getting started. 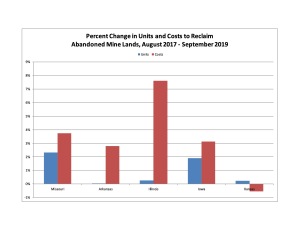 In my next post, I will report on some other interesting facts in the most recent reports on abandoned mine lands.

For other abandoned mine land sources, see previous post.